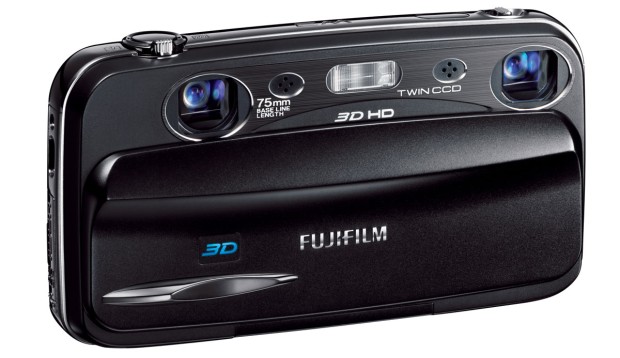 3D cameras haven’t really caught on yet for a number of reasons, but nobody told Fujifilm; they’re going right ahead with a new version of the W1, their 3D point-and-shoot from last year. The new one improves photo processing (reduces 3D artifacts like doubling), increases the size of the LCD to 3.5″/800×480 (it’s autostereoscopic, so you can see 3D without glasses), and adds 3D HDMI out, something you needed an add-on for before. It also now shoots 720p in 3D! That could be awesome. 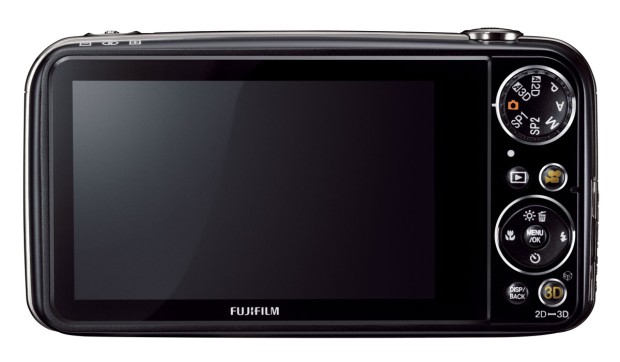 The Fujifilm W3 has 10 megapixels (well, 20 technically because there are two sensors), 3x optical zoom, and a few special 3D settings and modes. Available soon in Japan, and in September elsewhere for the low, low price of $500. Full press release below.

“Last year, Fujifilm introduced the first real, complete solution for 3D digital photography, once again showing our commitment to the evolution of imaging technology,” said Go Miyazaki, division president, Imaging and Electronic Imaging Divisions, FUJIFILM North America Corporation. “With the new FinePix REAL 3D W3 digital camera, we have made 3D imaging more accessible to all consumers, enabling them to shoot in 3D HD and making it easy to view their photos and movies on most 3D TV systems.”

The slim FinePix REAL 3D W3 digital camera with a black matte finish is ergonomically designed and measures 21.0 mm at its thinnest point and weighs 8.5 ounces with battery and memory card. The durable stainless steel construction ensures that the optical axis is balanced ever so precisely resulting in accurate 3D images. The W3 also has a horizontal lens cover with wave detail, which serves as the on/off switch.

Fujifilm’s FinePix REAL 3D technology captures true 3D thanks to its use of twin 10 MegaPixel CCD sensors and dual FUJINON 3x optical zoom lenses (35-105mm) that are spaced 75 mm apart to create realistic images that are similar to how human eyes see them. The synchronized control of the twin CCD sensors releases the left and right shutters at the same time. This technology produces a synchronized image with a natural sense of depth, and allows easy capture of 3D movies and photos in HD, and also provides the beneficial unique 2D Advanced Shooting modes.

The 3D and 2D Auto functions let anyone take high-definition, high-resolution movies and photos effortlessly and audio is captured in stereo to preserve its original impact. Photo data captured by the dual lens CCD system is processed by the newly developed RP (Real Photo) Processor 3D HD which merges the left and right images into a single image. This processor is also the power behind 3D Auto – the function that lets even first-time users take stunning 3D HD quality photos.

The FinePix REAL 3D W3 also comes equipped with a 3.5” high resolution Autostereoscopic 3D Widescreen LCD with 1150K resolution that displays high contrast images and movies that can be viewed in 3D without the need of 3D glasses. This new lenticular system uses rows of convex lenses that create a binocular parallax effect to produce a realistic 3D image with less cross-talk and flicker. 3D images can be shown in High Luminosity Mode that both display images 1.5 times brighter, and color reproduced 1.8 times deeper4, allowing for clear, distinct and vivid images.

Now it’s easier than ever to enjoy high quality 3D HD movies and still photos in your home, because the FinePix REAL 3D W3 comes equipped with a Mini HDMI 1.4 port. This allows the user to quickly and easily connect the camera with an HDMI cable (not included) to enjoy high quality movies at 720p and HD photos captured at 1920×1080 pixels (or higher) on most 3D HD TV systems.

The FinePix REAL 3D W3 includes advanced 3D and 2D capture modes. With Individual Shutter 3D Shooting, advanced users will enjoy the ability to take two shots of the same subject from different positions, and then the camera will automatically merge and save the captured images as a single, enhanced 3D photo. Photos of distant subjects like mountains and skyscrapers look amazing in enhanced 3D, while close-up subjects like flowers come to life in natural 3D. With Interval 3D shooting, you can shoot hyper (wide distance between capture of left and right data) for capturing 3D effect in far away subjects.

The Advanced 2D Modes also allow for independent use of the dual CCD sensors and FUJINON lenses in the FinePix REAL 3D W3. Just as if shooting with two digital cameras, the user can choose different zoom ranges and color settings for each image, capturing both at the same time. With Tele/Wide Simultaneous Shooting, you can zoom in on your subject while also taking a wide-angle shot of the same scene. With Two-Color Simultaneous Shooting, at one press of the shutter, you can take photos of the same scene with a different color tonality. Set one lens system to vivid colors and the other to vintage black and white, or capture the scene in both standard and black and white. Dual-Sensitivity Simultaneous Shooting allows the user to capture high and standard sensitivity simultaneously. For example, you can take panned shots of a moving subject at the exact same instant with different degrees of background motion blur. In dark scenes, you can prioritize blur reduction for one shot, and image quality for the other.

The FinePix REAL 3D W3 also comes with a variety of additional functions:

v Switch 2D/3D Button: Switch between capturing a subject in 2D or 3D instantly with the touch of a button and effortlessly capture movies and pictures for every kind of scene.

One Touch Movie Mode: No need to fumble to find the movie mode, as the button is located right on the back of the camera, instantly changing from still to movie mode, making it convenient for taking HD quality movies in either 3D or 2D.

v Auto and Manual Parallax Control: The camera automatically adjusts parallax in 3D Auto mode for an optimal sense of depth. Manual mode is also possible by operating the Parallax Control lever on the top of the camera to easily fine-tune the sense of depth and alignment of the images. Both can be used to eliminate “ghosting” and increase or decrease the 3D effect.

v Scene Positions: Select from among the 13 Scene Positions (SP) that matches the subject and situation. The camera automatically optimizes camera settings for some of the most common shooting environments, making it easy to get great 3D photos in virtually any shooting situation.

Getting high quality 3D prints is as easy as uploading your images to Fujifilm’s SeeHere.com a photo printing, gifting, and sharing website, and having them delivered right to your door. Fujifilm has integrated high precision prints with lenticular technology, resulting in stunning high quality 3D images with tremendous depth and detail. 3D prints priced at $6.99 for a 5”x7” print.

*1 As a digital camera equipped with 2 CCDs, according to Fujifilm research in August 2010.