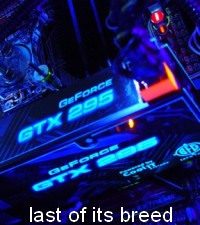 In case you didn’t know: BFG, a hardware company known for high-end gaming laptops, desktops, and components, is killing off its graphics card business.

Yet even though this has been known for a couple months, they’re still selling off their existing inventory and, contrary to previous statements, it now looks as if these cards will not be supported. So if you get a bum fan or accidentally chip the power connector, you’re going to be pretty much out of luck. Just an FYI if you’re thinking of picking one up.