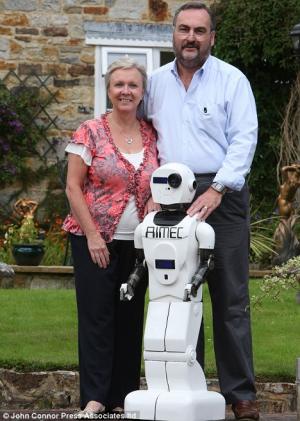 What do you do if you’ve created an incredibly successful game, made your millions, and can retire on the royalties? You build your own robot, of course. That’s exactly what the creator of the Aimec did: built a robot using off the shelf technology and custom software.

The robot is capable of following Tony and Julie (the builders of this prototype Cylon) around the house, tells jokes, snores, connects to household appliances, and apparently sounds like C-3P0. The Aimec isn’t available for purchase yet, but the self-made millionaire (he created the Cube World game) plans to someday produce the robot for home use. They hope to sell them for about $300, but at this point pricing is just speculation.

[From The Daily Mail via DailyTech]