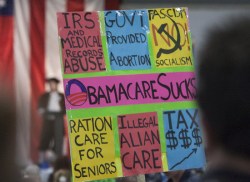 The Tea Party, the “American socio-political movement that emerged in 2009 through a series of locally and nationally coordinated protests,” and known for its colorful protest signs (as seen here), hates Net Neutrality. Why does the Tea Party hate Net Neutrality? “I think the clearest thing is it’s an affront to free speech and free markets.” Thus spoke Jaime Radtke, chairwoman of the Virginia Tea Party Patriot Federation. Net Neutrality is an affront to free speech? Did I wake up in Bizarro World?

The Virginia Tea Party Patriot Federation—a fantastic name, by the way—was one of 35 Tea Party groups that sent a letter to the FCC urging it to rubbish Net Neutrality.

Here’s an excerpt from the letter:

Over the past 25 years, the Internet has flourished in large part due to the extremely limited role that government has played. In less than a decade, the private sector has expanded broadband Internet access to over 95 percent of American households. Since 2004, the price to access the Internet has dropped by 23 percent, while during the same period overall consumer prices have trended upward.

Despite universal acknowledgement that Americans enjoy a free, open, and vibrant Internet, the FCC is relentlessly pursuing a massive regulatory regime that would stifle broadband expansion, create congestion, slow Internet speeds, jeopardize job retention and growth, and lead to higher prices for consumers.

We oppose the FCC’s effort to regulate the Internet under Title II of the Communications Act of 1934, which was written during the depression era to regulate telephone monopolies – 60 years before the Internet was ever conceived. These proposed regulations would permit the FCC to dictate how the networks that serve as the backbone of the Internet are managed, thereby removing incentives for further investment and opening the door for price setting or future regulatory action. It could also remove the ability for parents and ISPs to prevent inappropriate material from entering the home. This regulatory “reclassification” would effectively turn innovative private Internet services into a public utility.

I don’t doubt that the signatories of the letter have the best of intentions, but I can’t help but feel that they’re slightly misguided.

I don’t see how defending the interests of Verizon, AT&T, and Comcast (and other ISPs, of course) does us, the consumers, any good whatsoever. Perhaps these people have never tried to download a World of Warcraft patch using BitTorrrent with an ISP that throttles traffic?

Whose free speech is impacted there? Is the ISP “free” to throttle that traffic for whatever reason it wants to invent? Is Blizzard “free” to make available vital patches via the Internet, and to expect that you’ll be able to download it without interference from your ISP? Are you “free” to download said patch, or do your wishes play not part in any of this?

I can almost see where the Tea Party is coming from with respect to seeing the FCC’s regulatory powers increase. The Tea Party is generally anti-regulation, which is fine, so coming out against another regulatory agency makes sense from that perspective.

But really, to expect the ISPs to do “right” by you is laughable. If it could, Comcast and the nation’s ISPs would offer 1 mbps (down, mind you) and call that SUPER FAST INTERNET, then charge you $100 per month for the privilege of using it.