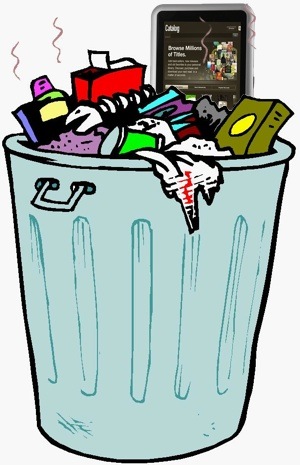 We’ve been saying this for months: ereaders are a commodity and they’re going to get worse. Now Farhad at Slate thinks we’ll be seeing Kindles for $99 sooner than later and I’d wager you’ll see a $30 reader around the holidays.

Before the holidays, Amazon will cut the price of the Wi-Fi Kindle to $99, and the 3G version will go for $150 or less. Amazon will do so, I think, not only to sell a lot of Kindles but also to cement its online store as the iTunes for books—the dominant force in the publishing business for the foreseeable future. A $99 price tag will make the Kindle the hottest gift of the season—much cheaper than the $499 iPad, more useful than an Xbox Kinect, and a lot more fun than a cable-knit sweater.

As I said, I’m willing to go one step further and say someone will release a sub-$50 model and sell it at Wal-Mart. This will be the holiday loss leader, probably in conjunction with a major publisher. This will completely parallel the fall of netbooks and it will get ugly near the end.