Today in at its office in San Francisco, Google has rounded up the press for an event with news on its mobile operating system, Android. Hugo Barra, Google’s Director of Product Management for Mobile, took the stage to discuss the evolution of mobile computing capabilities, when he shared a key new stat: 1 out of 4 queries on Android 2.0 devices in the US are being made using voice search.

That’s a big deal, and it shows that Google’s investment in Voice Search is paying off.  Barra says that even Google was surprised by just how frequently its users are using voice to generate search queries.

During a Q&A Barra said that there is a “significant difference” in how many queries come from Google’s voice search application on iPhone, but he wouldn’t say exactly how many fewer queries the iPhone app receives. The discrepancy likely stems from the fact that Google voice search is deeply embedded in the Android OS, whereas you need to launch a separate, dedicated app to use it on iPhone.

Barra also discussed some of the future potential of mobile devices. He used a chart to show that today’s smartphones are trending roughly ten years behind PCs in terms of raw computing power. However, wireless connectivity on low-latency 4G networks, which allows these phones to tap into massive computing infrastructure in the cloud, will help these phones leap forward in effective computer power very quickly. Barra says that we’ll effectively have “mini supercomputers in your pocket”. 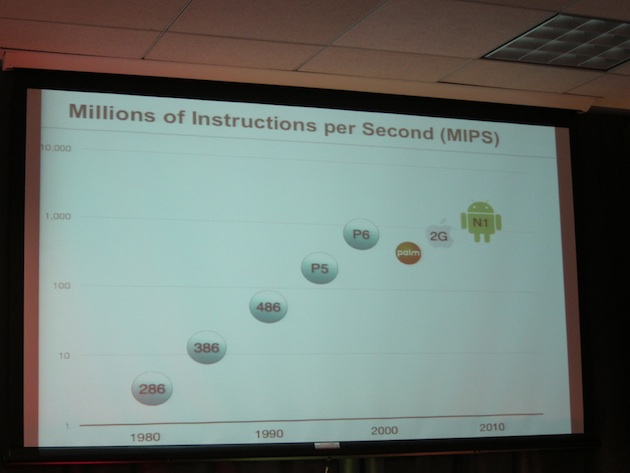