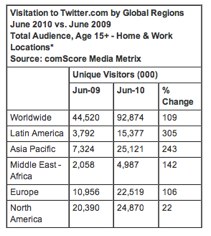 Twitter is still growing at a fast clip, according to recent numbers from web analytics firm comScore. A recent study found that in June, nearly 93 million Internet users visited Twitter.com, an increase of 109 percent from the previous year. Twitter saw 93 million visitors in May of this year. It seems that the network is seeing increased traffic from international markets, particularly in Asia and South America. Indonesia reported the highest traffic, with 20.8 percent of Internet users in the country visiting Twitter.com that month, followed by Brazil and Venezuela.

It’s important to note that these stats aren’t necessarily a good measure of the total number of people people using Twitter’s platform (it only includes data for people who have been to Twitter.com, and not any applications that access Twitter through the API).

comScore also analyzed Twitter usage via mobile phones for the six mobile markets currently reported by company (U.S., U.K., France, Germany, Spain and Italy) which unsurprisingly showed that Twitter is seeing increased traffic among smartphone users. In the U.S., 8.3 percent of smartphone users (4.2 million people) accessed Twitter.com in a month via the browser on their mobile devices. In Europe, 2.8 percent of smartphone users overall accessed Twitter.com (1.7 million users), with the U.K. experiencing the strongest penetration in the region at 5.8 percent, followed by Germany with 3.1 percent and France with 2.1 percent.

The total web traffic numbers are impressive considering that these don’t include third-party apps, like Tweetdeck and Seesmic, which are relatively popular amongst users. And it’s also important to mention that with the World Cup, Twitter was seeing record amounts of usage and traffic worldwide. In June, Twitter COO Dick Costolo shared the company’s internal stats, which show that Twitter gets 190 million visitors per month, and 65 million tweets a day. 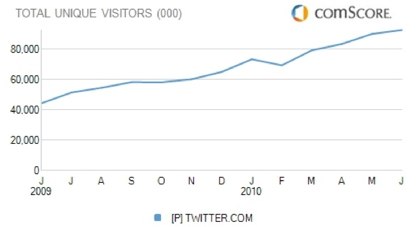