Over the years, we’ve covered quite a few startups that have sought to let users annotate and comment on webpages, usually with the help of a browser plugin. Few have gone on to gain traction (even Google’s own SideWiki has failed to make waves). But that isn’t stopping a new startup called Marginize from taking a stab at it. The company has just raised $650,000 from Atlas Ventures, Longworth Venture Partners, eonBusiness, SOS Ventures, and angels including David Cohen (you can see a fill list on CrunchBase). Marginize was previously part of the Boston TechStars class of June 2010.

The service is pretty simple: visit a website, and you’ll see a persistent frame on the right hand side of the screen displaying comments and tweets from other users (there are also options to share which page your browsing and what you’ve written). There’s also a Foursquare-like check-in component, which lets you show your friends how often you’ve visited a certain website. If you’d like to see it for yourself, here’s the Marginized link for this page.

Marginize founder Ziad Sultan is well aware of the many past attempts (and failures) in this space. But he thinks that he’s identified the common problems and how to fix them. First, he says that many other comment/annotation services suffered from a chicken-and-egg problem, where users would arrive at a site and see that nobody had left any content yet (which would make them less likely to fire up their commenting plugin in the future). Second, because these services generally rely on plugins, there’s often a high barrier to entry which can make them difficult to grow virally.

To solve the first problem, Marginize populates the ‘margin’ of every page with tweets that have linked to the site you’re viewing, which means many popular sites will already have supplementary content available. To address the barrier-to-entry issue, Marginize doesn’t require you to have a browser plugin to view content that’s been left by other users. Say, for example, I tweeted out a link to TechCrunch using Marginize — my followers would be directed to a version of TechCrunch that featured the Marginize sidebar, including tweets and comments, rendered in HTML.

Unfortunately, that HTML version will only work for a single page — click a link on that TechCrunch site and your Marginize sidebar will disappear. In order to keep it there persistently you’ll need to download one of the startup’s browser plugins (available for Chrome and Firefox, with Safari coming in the near future). You can alternatively use the less-convenient bookmarklet, which should work for any browser. Hitting it will add the HTML version of the Marginize sidebar to whatever page you’re currently viewing, but, again, if you click a link to another page, the sidebar will disappear until you activate the bookmarklet again.

Marginize may have identified some of the problems that hampered its predecessors, but it still has a long road ahead of it. Any service that requires a browser plugin has a fairly steep barrier to entry (even with the HTML-based preview). And while I certainly see the appeal of being able to communicate with other people in the margin of a website (there’s a reason so many startups have tried this), perhaps users simply aren’t keen on communicating this way. Then again, perhaps this space is poised to explode, just as soon as one of these services can get some traction (and if that’s the case, I think Facebook is poised to play a big part in it). 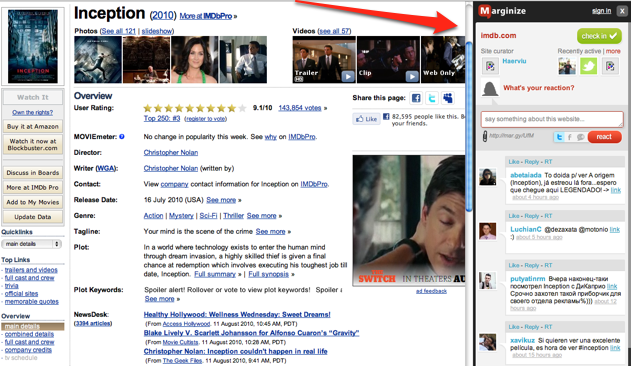