Former President Bill Clinton is looking to turn his 64th birthday into an opportunity to counter malnutrition in Colombia, reduce childhood obesity in the US, and improve lives around the world. And to do it, he’s turning to Birthday Wish, a service powered by Causes that makes it easy to ask your friends for charity donations in honor of your big day. Clinton will be sharing his Birthday Wish with his 366,000 Facebook fans, making this the most widely shared wish on the platform to date (and the first time a major celebrity has used it). You can find his Wish here.

Clinton has good timing — Causes cofounder Joe Green says that the service has been revamped in the last few weeks to better take advantage of Facebook Connect. Before now, Birthday Wish was used through a Facebook Canvas application — now it’s primarily hosted on birthdays.causes.com. Green says that offering the page through a website makes it more intuitive for users to share, and Connect sites also afford more flexibility than a standard Facebook app.

Green also shared some interesting stats about Birthday Wish. The service has raised nearly $6.5 million, and around $5 million of that has been raised in the last year alone. Also impressive is just how successful these wishes can be: Green says that if a Wish Creator (i.e., the person having the birthday) follows the service’s recommendations, the majority of the time they will generate an average of $100 in donations. Unfortunately not everyone follows the prompts (which entail thanking people who have donated, marking milestones, etc.), so some Wishes don’t fare that well.

Green says that Birthday Wish works because it efficiently taps into the viral nature of Facebook’s News Feed, and prompts your friends to donate in a way that isn’t too awkward. Rather than asking your friends repeatedly to donate money, Birthday Wish instructs you to call out each of your friends who donates with a Thank You update (and as your friends see those thank-yous, they’ll hopefuly donate too).

· Reduce malnutrition of Colombian students by 10 percent
· Give more than 20000 farmers in Malawi the tools to improve their lives
· Provide 5000 hours of expert help to support small businesses in underserved US communities
· Enlist 10000 US schools to create healthier environments for students & staff
· Reduce lighting energy use in major cities by up to 70 percent
· Improve lives around the world. 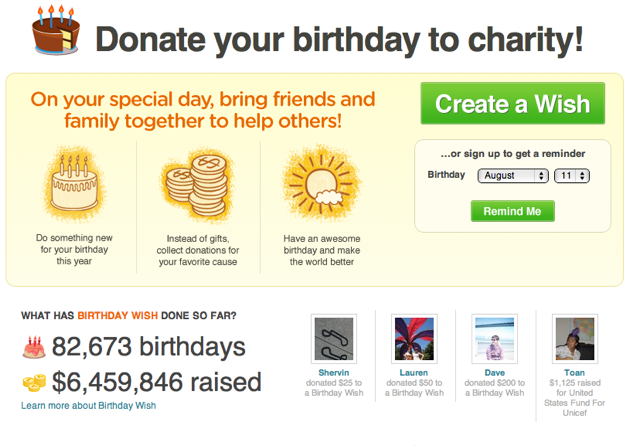