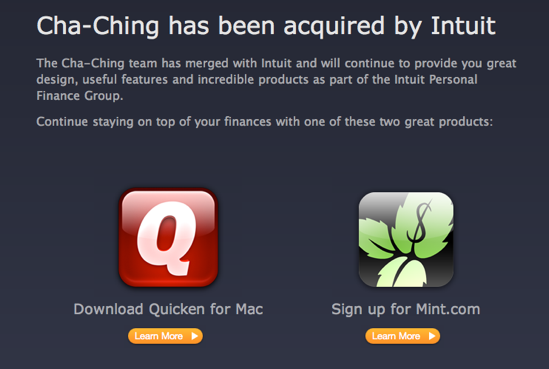 It looks like Intuit just acquired Cha-Ching, a Mac web app and iPhone app to help consumers manage their personal finance. According to the site of Midnight Apps, the developer of Cha-Ching, “The Cha-Ching team has merged with Intuit and will continue to provide you great design, useful features and incredible products as part of the Intuit Personal Finance Group.” See update below.

Cha-Ching appears to have been taken down from the App store. Similar to Mint.com (which Intuit acquired last year for $170 million), Cha-Ching’s Mac and iPhone apps allow users to keep track of daily transactions and bank accounts. You can schedule bills and payments, set budgets and upload receipts.

It’s unclear how Cha-Ching will be folded into Intuit, but the company could be using the technology to boost their Apple applications, which includes the Mint iPhone app and a Quicken app for Mac. And its looks like Intuit is trying to replace their existing personal finace product Quicken online with Mint.com, so Cha-Ching’s consumer-focused technology could be part of this strategy. And of course, Intuit will be acquiring the team from Midnight Apps.

Financial terms of the deal have not been disclosed at this time.

UPDATE: It appears that Intuit only acquired the assets of Cha-Ching, including the code and graphics. Mint founder and VP & GM, Personal Finance Group for Intuit Aaron Patzer sent us this response:

We did purchase the Cha Ching code and graphical assets from them, after the two developers who created the company joined the Intuit Personal Finance Group as employees earlier this year.

The code created by these two talented engineers in the years before they joined the Intuit Personal Finance Group has already begun to enhance our personal finance offerings. First, we’re using some of the visual assets and chrome to give Quicken Windows a facelift. Count on Quicken looking like a smooth, polished, modern desktop application when it releases this fall – along with additional influences deeper in the product’s architecture and function. Second, we’ll use Cha Ching iPhone code for new features within the Mint iPhone app. There are some tricks they were using that will make some highly-sought new features very slick when they launch.