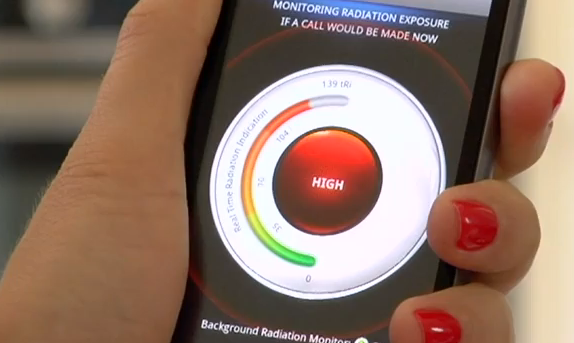 Remember how back during the Antennagate press conference, Steve Jobs explained that all smartphones have an Achilles Heel known as their antenna? Oh sure, we all rolled our eyes and then oohed and aahed when we learned we’d get bumpers. Well guess what… Jobs was right. Again. And now, courtesy of Tawkon we’ve got the proof.

First, a quick recap. Tawkon is an Israeli company that developed a radiation measurement app. Once installed, the app provides an indication of the current rate of cellular radiation emitted by the cellphone in-hand. From our original review:

The purpose of Tawkon’s app is to provide the user with an indication—or “prediction” as they call it—of the radiation level being emitted by the iPhone. This level changes based on environmental conditions, distance from cell towers, and even the manner in which the device is held. To illustrate: the iPhone’s antenna is located at the bottom of the device. If the user cradles the phone too tightly in the palm, the antenna has to work harder, thereby increasing radiation.

Tawkon wanted to debut its technology in an iPhone app, but couldn’t get it approved in the App Store. To their surprise, they were invited by Apple to visit the Cupertino HQ where they had meetings characterized as “positive” by Tawkon’s CEO, Gil Friedlander. App Store approval is yet to be achieved.

Tawkon has continued to plug-ahead, releasing a Blackberry app (download here). An Android version is in development.

Now that everyone is up to speed, let’s get back to the issue at hand: Proof that the death grip is real.

Tawkon produced the video below in which it’s clearly demonstrates that when the iPhone 4, the Blackberry Bold, and the Nexus One are held in the death-grip style, all three handset antennas are impacted. As the video shows, the result is that each of the three handsets compensates for the death-grip’s impact by increasing its cellular broadcast levels to a range that Tawkon considers ‘High’.

Too late to save Papermaster’s job, but the proof is in the pudding. I mean, the cellular radiation emissions.