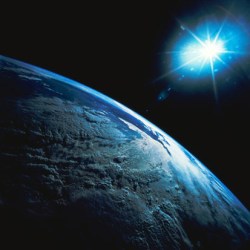 Stephen Hawking, perhaps the brightest mind this planet has to offer, says we’re doomed. That is, life on Planet Earth—summers at the beach, winters spent indoors playing World of Warcraft while listening to Paul van Dyk compilations—will come to an end unless we either A) stop being jerks to each other or B) colonize other planets. Woo!

The gist of his argument is that humans are dangerous little creatures. He specifically points to the Cuban Missile Crisis as a moment in time where we were perilously close to wiping ourselves completely off the face of the planet. That would have been inconvenient, yes.

We’re only going to see more and more of these situations as more and more people get their hands on destructive weapons and adopt unconventional tactics. “So, if I launch this missile the other guy will also launch his missile at me? Let’s do it!”

Solution? Well, outside of letting the above happen—perhaps squirrels will inherit the Earth, and won’t be so silly with it—we could try to colonize other planets.

Oil and other resources won’t last forever, and there will come a time when we’re like, “Oh dear, we’ve stripped the planet clean. What do we do now?”

Onward! Hawking doesn’t say which planets he thinks would be a good fit for us, but unless we seriously consider branching out our selfish and aggressive tendencies—which were evolutionary advantages “back in the day,” but they don’t exactly translate to life in 210—we may not last another couple of centuries.

Then again, everyone reading these words will be long gone by the time that happens, so whatever.