Short version:
While you may not have heard of this brand, if you are looking for a complete home theater setup or even stereo setup, complete with powered sub, for $1k or less, you will likely be impressed with Orb. Try them in your home for 30 days.

Full Review:
I’m an audiophile wanna-be. I like good sound, but I don’t think I’d ever spend more than a few grand on speakers even if I had the money to do so. I look for a bargain. Good sound that I can afford. At the same time, I don’t expect much from speakers that cost under $1k. When I bought my last set a few years ago, I had a hard time finding anything that I really liked for that price. So while was looking forward to testing new speakers, when I read what they cost, my hopes weren’t high.

Thankfully, I was pleasantly surprised. Even when I first hooked them up, I was impressed with the clarity of the high range, especially dialogue. To give the speakers some time to break in, I plugged in an ipod, set it on repeat, and left for vacation.

The Orb systems are composed of an 8” sub and a series of spherical mini-speakers that come in a range of colors and finishes. Each satellite, called Mod1’s, consist of a single 3” driver, set in a 4” steel spherical enclosure. They have gold plated binding posts and high power neodymium magnets. The powered sub, called the Super Eight, has a 200 watt hybrid BASH amplifier that can peak at over 400 watts housed in a cabinet that is a mere cubic foot. They are also assembled and hand finished in the US.

What differentiates their packages is how many of the mini speakers you get. There is the Mod1 ($798) which has 5 single orbs on shelf stands, enough for your basic surround setup. The Mod1 Plus ($999) adds an additional orb to the center speaker and the People’s Choice package ($1098), what I got to review, stacks additional orbs on the front speakers as well for a total of 8 orbs across the 5 channels, 2 on each of the fronts and center and a single for left and right surround. The orbs are modular, so you can keep stacking them on. In fact, if you wanted to upgrade your system, all you’d need to do is buy additional orbs and wire them all together. Their Mod4 packages have up to 4 stacked on top of each other. 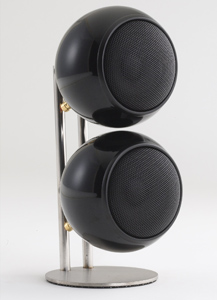 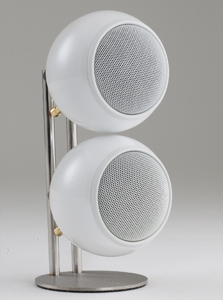 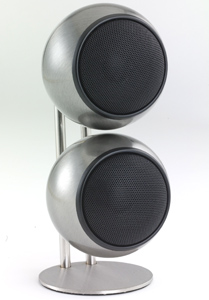 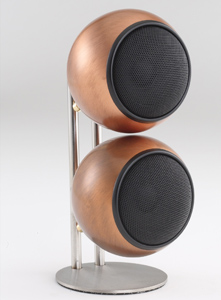 When I got back from vacation, I watched two movies, The Bourne Identity and Princess Mononoke. The first thing that hit me was how crisp and clear the dialogue was. In other setups, I’ve noticed how this can get muddled with other audio coming from the front speakers. Other effects in the high range are also quite sharp. In the beginning of The Bourne Identity, when Jason is being operated on after being fished out of the water by the boat, I was impressed with how distinctly differentiated each surgical tool sounded as it hit the metal tray.

The 8” powered sub provides ample bass that is tight and not overpowering. Explosions and engine rumble are present but not overpowering. You can feel the effects, although to do so I had to turn up the sub a bit more than I expected for the size of the room. 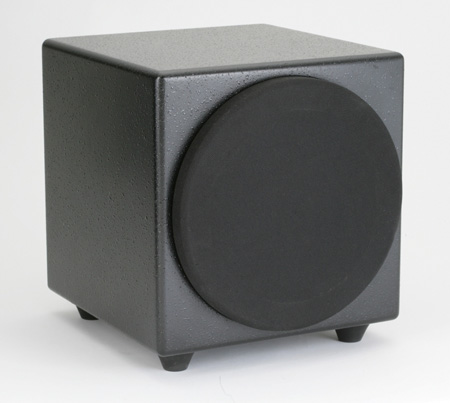 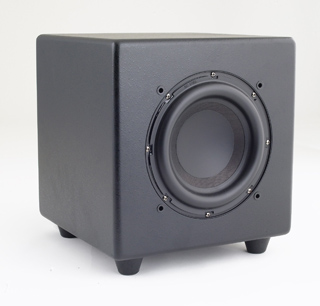 Listening to BT’s This Binary Universe, which has a dramatic range of sounds and textures and which I’ve ripped at 256k, I felt completely enveloped by the music.

When I compare it to my B&W Mini-Theater M-1’s, I feel the B&Ws had a slightly richer sound. To me this was only noticeable after playing the same song on both systems and running back and forth to compare. This effect was more noticeable when I first set up the speakers and improved over time.

The other minor inconvenience is in attaching the wires. The Orb’s modularity is a unique and very attractive feature. Tight on cash? Buy 5 singles and add on more as you can. When you have more than one on a stand, you have to have a jumper cable to go between speakers. Getting both wires in the single mount so they are good and tight is a minor inconvenience. Some people seem to bi-wire them, which would solve that problem if your amp allows for it. 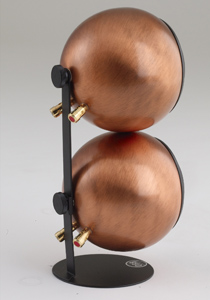 Don’t take my word for it, go listen to them! Well, that might be a problem. There is a reason you may not have heard of Orb Audio before, unless you’ve seen the banner ads of these speakers mounted on a woman’s bare shoulder. They only sell directly to consumers. According to the company’s site, one of the ways they keep costs down is by selling direct and eliminating the overhead and markup of stores. You do get a 30 day period to try them out and they will take them back and give you a full refund (minus shipping costs) if you decide not to keep them. If you live in LA or NYC, apparently it is possible to hear them.

For the money, these are a great choice. Before you buy a more expensive home theater in a box, consider giving these a listen. You will likely save yourself some money. These guys hate home theater in a box (HTIB) and have a long rant on their site, which I mostly agree with. Their goal is to provide great sound at a good price. I think they’ve done a pretty good job. I’m thinking of getting a pair for my office.