Q&A services have been generating quite a bit of buzz lately, first with hot startup Quora, and more recently, the launch of Facebook Questions. Now Fluther, a Q&A startup that launched back in 2007, is looking to help even more sites capitalize on this trend. Today the company is launching Federated Fluther, a distributed service that allows third parties to offer Q&A with a relatively small amount of work.

Federated Fluther works by syndicating questions across third-party sites that have integrated it — a process that involves adding a few lines of code, and works with the site’s existing authentication system. Ask a question about cars on one Fluther Federated-enabled site, and Fluther can send that question to users who are browsing an automotive site (their answers are then relayed back to wherever the question originated). As with Fluther’s original product, questions and answers are distributed in real-time, and CEO Ben Finkel says that 98% of questions asked on the service get answered, most of them in a few minutes.

So why would a third-party want to embed this? One big reason is traffic — Q&A generally does quite well on search engines. Fluther has optimized the service so that its third-party partners get the SEO benefits of having these questions and answers on their sites. This content will also appear on Fluther’s main portal Fluther.com, but Fluther is not exposing it to search engines so as not to compete with its partners. Finkel says that third parties also benefit because Q&A can be quite engaging (thereby keeping users coming back to their sites for longer periods of time) and because users browsing Fluther.com will also be introduced to these third-party sites.

Federated Fluther will obviously face quite a bit of competition from the established Q&A services, and it’s possible that Facebook will offer a Connect-enabled version of Questions at some point down the line. It will also take a while for the benefits of the federated model to become apparent, as the service won’t be able to target questions at communities of experts until it has numerous third party sites on board. That said, Fluther can still direct questions back to its core base of users at Fluther.com, so it will be able to return answers most of the time. 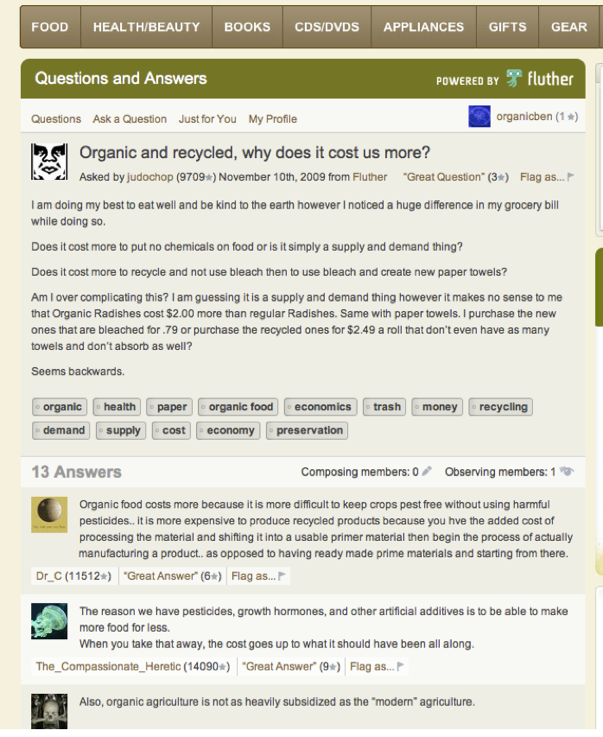