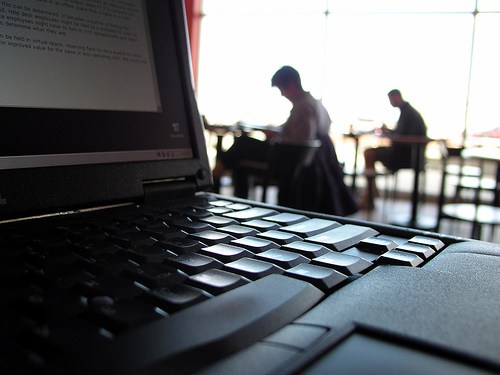 Darn interesting tale in the Los Angeles Times that tells the story of the DOWNFALL~! of the Wi-Fi café. It seems freeloaders have ruined all of the fun. You know, the lone guy who sits down at a table for four, then camps for three hours having ordered a single medium coffee. Way to go, guy.

Several cafés are fighting back. They’re banning Wi-Fi altogether from the premises, and are finding a new crowd in the process: the anti-Wi-Fi crowd. Not everyone wants to go to a café where they’re surrounded by MacBook Pros wearing annoying stickers. Maybe it’d be nice to go to a café and have a live conversation with a fellow human being without having to put up with some person clacking away on their laptop, or Skyping at the top of their lungs?

It goes beyond the inconveniences of having laptops strewn all over the place. One person sitting at a table for four, hovering over a single cup of coffee, does not generate nearly the same amount of money for the café as a party of five ordering lunch.

Why would the café owner want the single person when he or she can have a whole group of people?

And let’s not forget that the party of five isn’t sucking down electricity with a laptop, which also adds to the price of hosting the laptop user.

I remember when I used to regularly write from a café, I would go out of my way to order lots and lots of food simply to offset my being there. Granted, I’m a Panicky Pete, but I always felt like my mere presence with a laptop was putting the owner in the poor house.

So, in conclusion: when using a laptop at a café, don’t be a jerk about it.