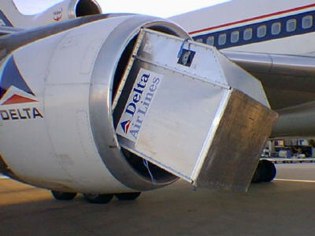 More than a few of you have cut business travel to the bare minimum, I’m guessing. The improvement in video calling and presentations is probably the biggest reason – with things like Skype video and screen sharing we’re not all that far away from having a near-in person virtual experience. But the orchestrated indignities of air travel – and you know exactly what I mean – also play a part. Flying from one place to another, unless you are doing it from a small airport on a private jet, is just going from bad to intolerable.

I’m not talking about leg room, which for someone like me who’s 6’4 makes flying coach over long distances torture. Or the indifferent TSA, who often seem to be the biggest security threat in any given airport. I can’t get a bottle of water past security, but I’m pretty sure I could get a gun on board a plane if I wanted to. No, what’s really making flying just terrible are all the people that work for the airlines. My expectations are pretty low after flying mostly with United Airlines for the last decade. And even so, Delta managed to, somehow, make United actually look good.

The newer crop of airlines understand that happy employees tend to make good employees. Southwest, JetBlue, Virgin America – I’ve had recognizably positive moments on all of these airlines. Sometimes just from an employee who went slightly out of their way to do something right.

But Delta, oh God that airline sucks. I flew them to New York and back last week, choosing them because of the ticket price and because they now have wifi on some flights. This was my first, and last, experience flying that godawful excuse for an airline.

I bought a first class ticket, which is one of the small luxuries I’m willing to pay for in life. This was a last minute purchase and the flights were around $1,500 each way.

I travel light – a computer bag and one of those very small roller bags that’s always considered a carry on. I don’t check luggage because, we all know, it adds at least half an hour after you land.

On the flight out to New York I was stopped at the gate and told my bag was too big and they couldn’t let me take it on. They said it wasn’t their fault, it was FAA guidelines that prohibited them. I told them that I wasn’t going to get on the plane unless I could check it. When they realized I was in first class they said to go ahead and bring it on.

As far as I can tell there aren’t really FAA rules on the size of carry on baggage, it’s pretty much up to the airline. And my bag has been carried on to countless flights without, as far as I know, endangering the plane or any other passengers. And if that bag was a danger, it certainly wasn’t less of a danger just because I was in first class.

But what really got me was just how gleeful the two gate employees were about the whole thing. I could tell that they lived for moments like this. But that was just a taste of what Delta had for me.

The flight back – 1843 from JFK to Seattle – that was the one that I won’t soon forget. I got to the airport and checked in just less than three before the flight. I checked that small suitcase this time because they’d put the fear of God into me on that flight out. That was about 48 hours ago exactly, and I still haven’t seen that bag again.

The flight had the obligatory JFK 2 hour wait on the runway, which isn’t Delta’s fault. But the obligatory hateful flight attendants were there too, and seemed pretty happy that they hadn’t stocked enough food on the flight. I heard grumblings from cattle class about it, and an attendant got on the intercom to let them know that they wouldn’t be eating any time soon.

Then we landed. At this point my bag was somewhere other than inside the airplane, and Delta should have known all about it. It turns out that at least most of the bags for the first class customers were, likewise, not on the plane. You’d think that they’d maybe let us know about it. Instead, they let us all wait 30 minutes for the bags to start coming out, and another 20 minutes until they were all gone. Then we, the first class passengers, walked over to the Delta baggage counter. To be told that our bags were never put on the plane. Even though I at least checked in hours before the flight.

Why weren’t they on the plane? I’m making an educated guess here, but it’s probably because some Delta employee who hates his job decided not to bother.

Ok, lost bag. It happens. And it’s annoying that they didn’t take a moment to tell us instead of making us wait and find out an hour later. But the fun was just beginning.

They would not deliver my bag to my home. I could choose to come back to the airport over the weekend. Or they’d be happy to fedex it to me for delivery on Tuesday. Can I have a receipt? No, our printer is broken.

The guy next to me needed his tuxedo, he said. No luck. Another guy, traveling from India, said he had medication in his bag that he needed immediately. That put a smile on the baggage counter woman’s face as she told him to go find a doctor over the weekend and get new prescriptions. Welcome to America.

So I’m now patiently waiting for the Fedex delivery of my bag on Tuesday to my home in Seattle, and I’ve charged back the entire flight on my credit card (I’ll just print out this post when the paperwork comes). And eventually Delta will either get their act together or just flail into bankruptcy and be destroyed by better, smarter, happier competitors.

But what I’d wish would happen is that some of these super expensive management consultants that are advising the airlines would just tell them one simple truth – I can live with no leg room, no food, dirty bathrooms and long delays. I can even live with lost bags.

If only a flight attendant, or baggage person, or whoever, would just commiserate with me for one moment. Maybe smile and say they’ll try their best to help. But until all that bad energy is gone, and the airlines have employees that don’t stare daggers at their customers, I’m out. I’ll stick to Virgin, Southwest and Jet Blue. Mostly Virgin because they have Internet. And if I can’t fly with them I’ll just cancel and use Skype video. Because life’s too short to deal with these assholes any longer.

And if you’ve read this far, thank you for indulging me. This was cathartic and sometimes I just have to rant a little, or else turn into one of those miserable Delta people and hate the world.

Update 2: Delta Passenger Kicked Off Flight For Asking If Pilot Had Been Drinking