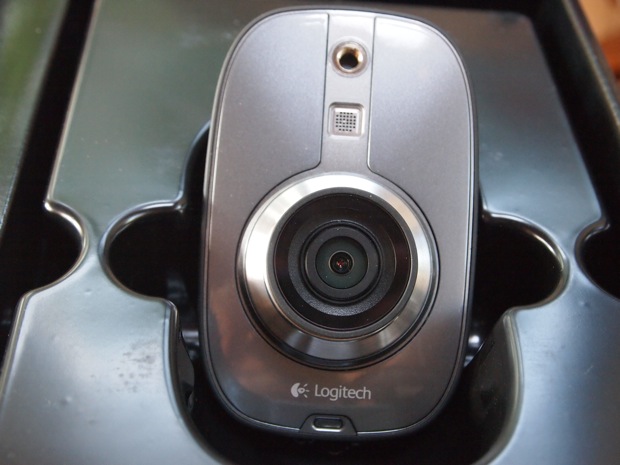 Short Version: If you know how to plug in a lamp, you can probably set up the new Logitech Alert 750i indoor camera. Luckily, the 750i is much more useful than a lamp when it comes to home security and monitoring.

I’m kind of a connoisseur when it comes to home monitoring. My neighbor, a former Hell’s Angel named Carmine, dosed me with the camera bug when he installed six night-vision cameras on the front of his Brooklyn home, a 10×40 foot slice of heaven that, in short, was monitored like Fort Knox. He caught some kids stealing his car once and even got a great video of someone stealing the rims off of a Nissan in the neighborhood. Because I work out of my attic and don’t want to have to run down the stairs every time a Jehovah’s Witness ding-dongs, I decided to install a camera of my own.

I originally installed a wireless Linksys camera with Vitamin D but I may just switch to something in the Logitech Alert family – with a few caveats.

The included software allows you to pan and zoom across the frame – you’re really looking at only part of a wide-angle image and zooming and moving over it, so there are no servos to alert bad guys of your presence. The camera takes an “HD quality” picture and works in low light.

When your monitoring PC is on the camera will send emails when it detects motion. You can also connect to the camera using a web interface via alert.logitech.com. The interface mirrors the PC interface exactly, so this means you could feasibly turn off the PC during the day and monitor the situation from time to time. A built-in microphone allows you to listen in on conversations that thieves may be having while they do the old “toothbrush and camera” trick.

The camera also supports mobile viewing on iPhones, Android smartphones, and Blackberries. You can add multiple cameras to the system, allowing you to view different scenes from the same interface.

The camera also records to MicroSD and the video it grabs can be played back on any PC or Mac. This offers an off-line backup of suspicious activity.

The Bad
The web accessible systems are slightly hobbled by trial-ware. If you want to simply view your camera for up to three minutes at a time, you can use the free version of the software. This is literally just a viewer. You can also subscribe to the Logitech Alert Web Commander, a copy of the desktop software for the web. This costs $79.99 and enables ten minutes of live viewing as well as video replay, pan/zoom controls, as well as mobile access.

While I like powerline networking in some cases, you’re also hindered in camera placement by the fact that you need to be near an outlet to install the camera. While 90% of the time this isn’t a problem, but map out potential power outlets before you buy.

Finally, the motion detection software is a bit wonky. I sent the kids out to dance around in front of the camera and got no notifications. However, when the tree in the image waved even slightly, I was bombarded with notifications. However, in general if you set this camera on a less busy scene – a front door, say – it works well.

Bottom Line
The 750i is a great camera with a few minor problems. This is obviously a new product line of Logitech and they’re working on improving the software over time. I’m also going to review its outdoor brother, the 750e, next but generally Logitech’s Alert solution seems to be stable, usable, and almost idiot-proof. The fact that you can get a camera up and running in a few minutes is fabulous and barring a few issues with networking and motion detection, it’s a great way to keep an eye on the kids, a summer home, your special “grow area,” or the dogs.