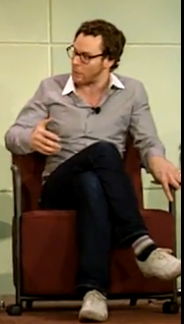 Today at the Techonomy conference in Lake Tahoe, CA host David Kirkpatrick sat down with Reid Hoffman and Sean Parker to talk about what comes after the social revolution. Both Parker and Hoffman made it clear that they don’t think social is going anywhere anytime soon. So Kirkpatrick asked what the most interesting social opportunity is that Facebook isn’t directly involved in?

Hoffman said that his answer was gaming, and that’s why he invested in Zynga. But going forward, he wasn’t sure yet. But Parker gave a more foward-looking answer. “I think the move to live is pretty interesting. No one has nailed live,” he said.

Specifically, Parker is thinking about live video. He notes that while Skype and some others are playing in this field, he thinks long-term there will be something along the lines the Internet hasn’t seen yet.

It shouldn’t be a huge surprise that Parker feels this way, he has recently been helping out the live-video startup Chatroulette along with his former Napster partner Shawn Fanning. Parker won’t say what his specific role is with the company, but it’s likely as an advisor like Fanning.

Parker said he sees the Chatroulette idea moving from a one-to-one to a one-to-many idea. He notes that the way to move it on from its dubious distinction as a penis showcase is to use algorithms, perhaps based around “nexting” — the mechanism you use in Chatroulette to go to the next video stream.

Later, he reiterated that live video is what he’s spending most of his time thinking about these days.

Watch Hoffman and Parker during their panel in the video below compliments of David Spark.