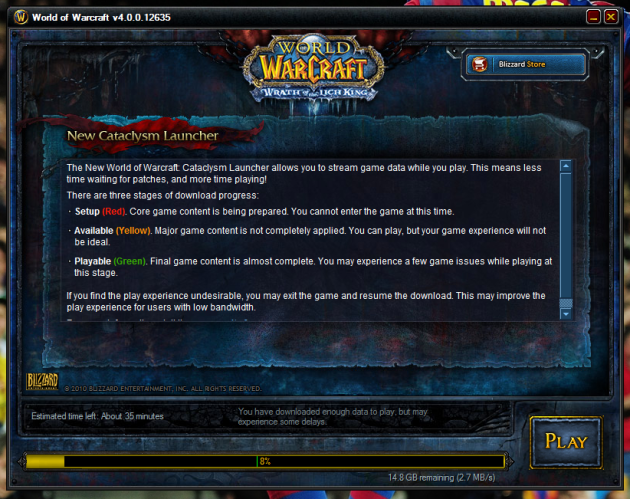 My dumb phone woke me up at 4:13am this morning, with a suspicious looking e-mail from “WoW Expansion Beta” causing the ringer to go off. I guess I forgot to turn the phone off. My mistake. The e-mail, entitled “New World of Warcraft: Cataclysm Beta Client Available” talked about how Blizzard had developed a new WoW beta client, one that would, via a new Launcher, implement some new sort of streaming technology that would make downloading and applying patches easier for everyone. It turns out, yeah, that was a legitimate e-mail, as a Blue post on the forum confirmed first thing in the morning.

I’ve taken the liberty to take a quick video of the new Launcher in action. You can see how the game streams data from its servers to your computer.

The gist is that you’re now able to partially download an update or patch, and begin playing almost immediately—certainly faster than you otherwise would be able to.

This particular instance shows a patch less than halfway completed, but I’m able to log into the game and play.

Oh, also: the Worgen, Zorres, is messed up because Blizzard updated the Worgen textures after I created him, so you get those weird splotches. The joys of beta testing!