One publicly traded Web business that seems to be humming (unlike AOL) is OpenTable. The company announced second quarter earnings last night. Revenues were up 37 percent to $22.5 million, and net profits rose a whopping 273 percent to $2.6 million, or $0.11 per share. Non-GAAP earnings per share were $0.15, handily beating the $0.12 consensus.

Those diners have now written more than 7 million restaurant reviews. As a point of comparison, Yelp has a total of 12 million reviews across all local businesses, and CEO Jeremy Stoppleman considers the those reviews to be Yelp’s single most important competitive advantage. Many of OpenTable’s reviews are simply ratings, so it is not completely apples-to-apples. On the other hand, OpenTable deletes reviews after six months to keep them fresh, and you can only leave a review if you’ve booked a table at that restaurant through OpenTable.

To make those diners even more loyal, OpenTable is getting into group buying and flash sales by launching a weekly deal program called Spotlight, which will offer deep discounts on meals at OpenTable restaurants. For $25, consumers will be able to get $50 worth of food at a promoted restaurant. (Yelp is also testing out similar deals).

Executed properly, these discount deals could have a significant impact on OpenTable. Using discounts to entice new customers to try a restaurant can be very effective, as Groupon is already showing. (At our Social Currency CrunchUp last week, the owner of Stone Korean Kitchen in San Francisco explained how selling 2,600 Groupon discounts at a loss helped drive repeat traffic and introduced his restaurant to new customers). If diners have a good experience, that will increase their loyalty to those restaurants and to OpenTable, potentially driving more reservations in the future. Anything that results in more reservations and increased customer loyalty will keep OpenTable growing.

But what is the deal with having to print out the deal certificate? Why can’t diners just show the coupon on their mobile phones? 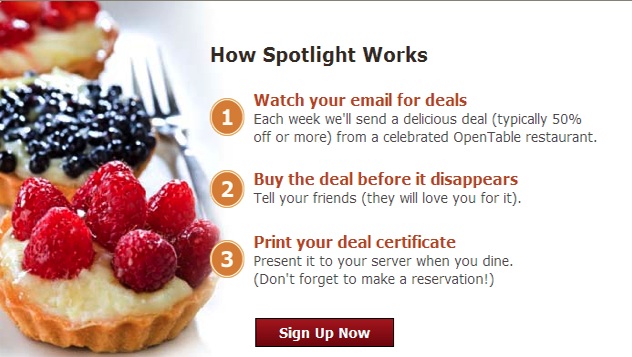