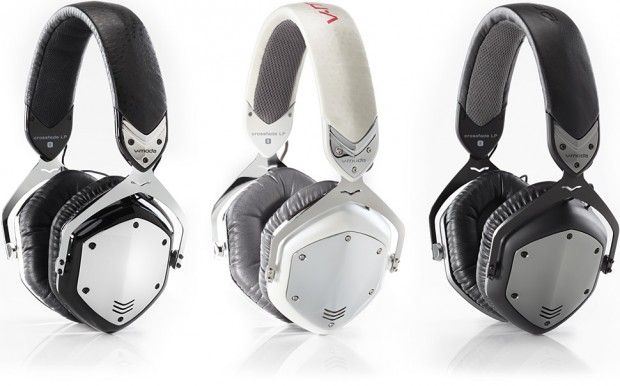 Short Version: V-Moda’s Crossfade LP headphones are designed for versatility, with the idea of taking them anywhere and providing you with a rich listening experience. I found a mixed bag full of excellent sounds, somewhat awkward hardware, and a confusing compatibility list.

For starters, it’s very likely that you’ve never seen a set of headphones that looks quite like this. Forget the standard soft, cushioned look you would expect. Each side of the phones sports metal hardware that almost resembles kitchen utensils. The fact that they are fairly comfortable once you put them on belies their extra-sturdy look. However, they are quite a bit heavier than most other headphones I’ve used. You can adjust them, of course, but there is an extra weight that was difficult to ignore. On the other hand, they fit so snugly that external noises were nearly eliminated.

The set comes with two separate audio cables, plus a ¼” converter. One cable has a 3-button remote, to be used specifically with the iPhone 3GS. The other is a standard cable that is supposedly to be used with all other devices, but you can certainly use it with your iPhone just as well.

There are several devices that are supported by the 3-button remote, but there are also some cases where only the play/stop button works for certain devices. A full compatibility list is available on v-moda’s web site, and it is definitely worth checking out before making this purchase.

As for the remote itself, it is placed about six inches away from the end of the plug that you insert into the headphones. This made it difficult to know for sure which button I was hitting, at least until I was familiar enough with it. But even then, it still felt awkward to have the remote so close to my face the entire time.

Thankfully, the most important part, the sound, is very good. There was a bit of buzzing when nothing was playing, and this seemed to be universal, no matter what device I plugged into. I tried them out on an iPhone, PC, and 8-track recorder. In all cases, I was impressed with the fidelity of almost all of the ranges, the lone exception being the bass, which seemed a tiny bit muddy occasionally. The high and mid-ranges were crystal clear and created a very nice listening environment.

If you’re looking to spend $250 on headphones, you want them to be the ones you use exclusively. But for the time being, you may not get all of the functionality out of them, depending on your device. I expect compatibility will open up eventually. You get a nice, study case and a cleaning cloth for good measure (got to keep your utensils looking sharp). This could be a good long-term investment. Just do your research first.