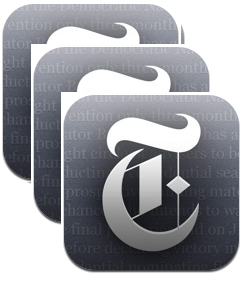 As one of the world’s leading media publishers, it’s critical for The New York Times Company to stay ahead of the curve in the digital space, or die trying. Hence, its efforts on the desktop with Times Reader 2.0, as well as its mobile website and multi-platform applications.

But the company has now come up with an additional way of deriving (sorely needed) revenues from its mobile apps apart from selling or slapping ads on them: licensing.

The NYT is reportedly experimenting with a platform dubbed Press Engine, which will allow other publishers to produce their own apps for devices such as the iPhone and iPad, apparently because they kept asking for a decent way to do so.

According to AdAge, which gained insights about the platform straight from a Times spokesperson, publishers will pay a one-time license fee for the platform at first, followed by a monthly maintenance fee. Any revenues generated from advertising or distribution of the apps, the publishers will get to keep for themselves.

Update: the press release is up.

The iPhone and iPad application templates will include the following features:

The first publishers to sign up for Press Engine are the Telegraph Media Group and three U.S. newspapers, namely Dallas Morning News, Providence Journal and Press-Enterprise.

James Moroney, CEO and publisher at the Dallas Morning News, is quoted as saying that the company plans to debut its iPad app, built using Press Engine, near the beginning of next year.

Like any publisher with no intention of getting left behind as the world evolves, the Dallas Morning News will of course need to figure out how to marry charging for the iPad application with posting all of its content free on the Web, Moroney acknowledges.

In other words: licensing another publisher’s apps does not a business model make.

Christine Topalian, director of the News Services division at the Times, also told AdAge that the initiative will not necessarily result in a tsunami of NYT app clones from publishers, but rather aims to help them “take the DNA of [its mobile apps] and the functionality of them”.

Nevertheless, if you start seeing news sites offering mobile applications that vaguely remind you of your experience with the NYT’s apps, you might just be looking at one that was replicated with their help, in exchange for a licensing fee.