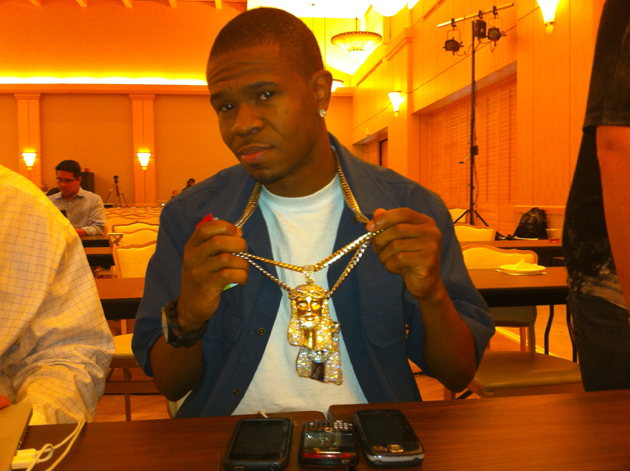 Chamillionare got his first taste of the magic of the Internet in 2004, with the launch of his first website Chamillionaire.com. The community around the site’s message boards exploded unexpectedly, “at the time it was really creative and really cool,” he told Mike Arrington at today’s Social Currency CrunchUp.

Other highlights from the interview include Mike Arrington calling the hip hop artist’s entourage “goofy,” asking, “What kind of rims are cool now?” and ending with the memorable,”You guys know how to manipulate the tech industry to get what you want, but you have the lamest phones …”

In retort, Chamillionaire insisted that he carries around his 3 phones, a Blackberry Curve 8700, an iPhone 3Gs, and a Sidekick XL, for “simplicity” and joked that he checks in as “Mike Arrington” when he stays at hotels. On why he attends tech conferences, “I just want to get a business card from each of you.”

Curious, we caught up with the artist after the panel and asked him what exactly he thought the tech community had to offer?

“Everything. Access to people through social networks. We don’t build these social networks, we don’t blog on TechCrunch. People here are like what would a rapper care about TechCrunch for? It’s crazy, it’s about distribution of information. It’s just getting information to people, that’s just what major labels are. They’ve got companies that distribute for us now so it’s like cutting the record labels out – I’m doing you a favor, you’re doing me a favor and I’m getting to where I need to get to. “

On his future plans? “I just want to innovate.” He said, insisting that he couldn’t reveal any more information.

Video of his onstage interview, below: