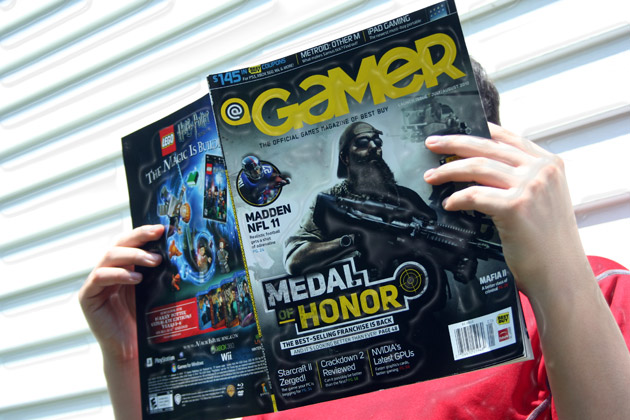 Conventional wisdom says that it’d be a better idea to build a ladder to the moon than it would be to start a magazine in 2010. Apparently Best Buy disagrees. The retailer announced, some months back, that it would be starting a new video game magazine called @Gamer. (Pronounced “gamer”—ignore the @.) It hooked up with the good folks at Future, the same people who publish the World of Warcraft magazine, as well as Edge, PC Gamer, and Nintendo Power, to produce it.

I had the good fortune to talk to the magazine’s Editor-in-Chief, William O’Neal, and its Editorial Director, Julian Rignall, over the past few days to help get a better understanding of the magazine’s raison d’être. Hooray for random French phrases.

@Gamer is a monthly magazine that you’ll be able to find at your local Best Buy. The first issue, with a cover story on EA’s upcoming Medal of Honor reboot, is available now. Each issue features a number of coupons that can be used at Best Buy. $20 off this game, $10 off that one, etc.

It was put together in only around 40 days. I’m not sure how many of you are familiar with magazine production, but 40 days is really quite swift.

The first question you ask is, simply, “Why?” It’s not like there’s a dearth of video game information online, right?

“The goal of the magazine is to offer gamers an easy, digestible way to make purchasing decisions for games and accessories and things like that,” says William O’Neal, the magazine’s Editor-in-Chief. “A lot of what’s out there [magazines, blogs, etc.] caters to the same type of people, geared toward fairly hardcore people who are obsessed with minutiae to a certain degree.”

I realize that many of you are by definition “hardcore.” Lord knows if you spend even two minutes on this site that you’ve clearly demonstrated an interest in technology and gaming and whatnot far above and beyond that of the average man on the street. But that’s the very problem: there’s so much out there for us, the hardcore, that the guy who goes to the mall once or twice a month and looks around the new release aisle in Best Buy doesn’t really have anyone to turn to.

“Not everybody wants to read a 3,000-word exposé on Cliff Blezinski,” says O’Neal. “Some people just want to know whether or not the next Gears of War will be awesome or not.”

Julian Rignall, the Editorial Director, calls the magazine “boiled down.”

Hardcores may read it just because they read everything all the time, but casuals may see the magazine on the rack at the store and say, “A new Medal of Honor? I didn’t know that.”

For the record, I like to read 3,000-word exposés on this or that. That’s why I subscribe to Edge magazine, which is primarily known for its fanciness. And I am nothing if not a fancy man.

Best Buy, you say? We all know my storied history with the company, but how do the suits there affect the content of the magazine? Do they sit in smoke-filled rooms and demand that Game X be on the cover even though the magazine’s editors want Game B?

“We dictate what we want to do, and that’s that,” he says. “The people at Best Buy who we actually deal with—and we on the editorial side of things don’t really deal with Best Buy too, too much—are pretty hardcore gamers, it turns out. They realize that the magazine will only be beneficial to Best Buy if it’s seen as a legitimate gaming outlet. Gamers can figure that out a mile away.”

“They all have a gaming background, all understand gaming, all understand magazines,” he says. “They really ‘get’ the fact that if we’re just a shill magazine, saying that every game is great, then nobody will buy the magazine. They understand that the editorial side of the magazine is over here, and that the little Best Buy bits [the coupons and whatnot] are on that side over there. There’s a clear division.”

As you might expect, the magazine doesn’t focus too much on everyday news. You won’t see articles about how Tetsuya Nomura bought a new pair of pants, or that a GameStop in Peoria broke the street date of a game by 17 minutes. You will see big news, if only because there’s the expectation that the people reading @Gamer, again, aren’t spending every waking hour reading game news online. “Oh, they’re making a 3D Nintendo DS? Cool!”

Based on the first issue, there’s a healthy mix of previews and reviews, both of which are kept fairly brief. Again, no 3,000-word articles on the new Sims 3 expansion. @Gamer doesn’t get down like that, to use vernacular from 1989.

The Internet! I asked the guys how they planned to use the Internet, if at all. (You’ll note that @Gamer is already taken on Twitter. Mm.)

O’Neal says that the primary focus of the magazine will be on just that: the print magazine. There may be online content, but it’s a magazine above and beyond everything else.

Rignall described it a little further.

“There may be an online component in the future but it doesn’t need to be huge,” he says. “We [Future] already have one in Games Radar. The Web site will probably be a little more bloggy, a little more conversational. A sort of ‘Here’s what we’re playing this week,’ that kind of thing. But it won’t be a news source or review source.”

No, that’s what the magazine is for.