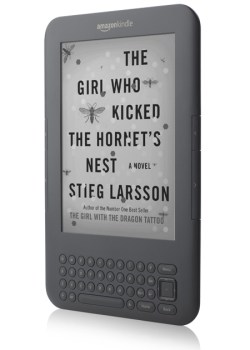 Amazon announced the Kindle 3 last night, and it doesn’t look too shabby at all. The most important part is the inclusion of the next-generation E-Ink display, previously only found in the too-big-for-casual-use Kindle DX. (The low price, $139 for the Wi-Fi version, certainly doesn’t hurt.) Immediately following the announcement, I saw something that confused me. For whatever reason, it seems plenty of people are comparing the Kindle to the iPad, almost as if these people want the Kindle to be the iPad. Why is that?

What is the Kindle? It’s an e-reader, and primarily an e-book reader at that. Yeah, Amazon tacks on a Web browser and other assorted goodies, but you buy a Kindle so you can read e-books.

No, because the Kindle does one thing, and it does it well: it displays e-books.

It’s a fine device, one of the better consumer electronics items in recent memory. Much of that can, and should, be attributed to the hard work of E-Ink, Inc. Amazon’s work in securing the rights to e-books should also be commended since an e-reader without content is like a space program without funding. Oh, wait…

So, the Kindle is an excellent e-book reader. Nothing more, nothing less.

What is the iPad? A flashy, catch-all device. Yes, you can use it to read e-books, but it’s not designed exclusively to do so. In fact, a class-action lawsuit was recently filed against Apple because people don’t like how the iPad overheats when used in direct sunlight. It’s hard to read the great American novel on the beach when the device you’re using shuts off because it’s too sunny outside.

To be fair, yes, the iPad does much more than merely display e-books. You can watch movies using Netflix. You can watch old episodes of Lost courtesy of iTunes—well, you can watch whatever you want provided you have it in the proper format. You can play legitimately good video games on there. You can tweet to your heart’s content. And if you’re lucky, you can read about how your Facebook details are all over the Internet! (That’s a joke, folks. Simmer down.)

But not everybody is in the market for such a device. As shocking as this may sound, there are people, honest to goodness people, who like to read books in the year 2010. They’re a rare breed, perhaps—others are far too busy watching Dancing With the Stars or fretting over whether or not Steve Carell will return to The Office—but they do exist. These are people who would otherwise spend their free time browsing the local bookstore for the latest biography of so-and-so, or reading up on the history of the Voyager program.

Some people simply like to read books, and for them the Kindle (and others like it) is the perfect device. Full stop.