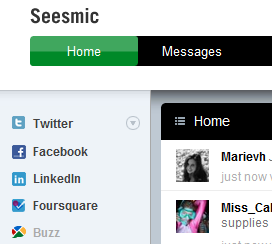 If Brizzly wouldn’t be slower than molasses in January, I would have long deemed it my Twitter web client of choice (I don’t like running too many desktop clients if I can avoid it – switching tabs in my browser is much quicker). However, it is as slow as a tortoise, so I took a look at the new Twitter.com (testing inline media nowadays) and Seesmic Web for good measure as I tend to use the latter on my iPhone and Android phones.

One thing the Web app has always lacked, is support for Facebook. However, there in the sidebar was the Facebook logo, along with that of LinkedIn and Foursquare. Turns out support for the latter was added last month, along with Ping.fm.

The Facebook and LinkedIn integrations, to the best of my knowledge, are brand new. You can now see status updates and comment on them in separate Seesmic columns, and in the case of Facebook it also allows you to ‘like’ and email things so you can easily share stuff with your friends straight from the Web client.

I also noticed that, at least in Google Chrome, there are desktop notifications that pop up when you receive direct messages or when someone mentions your username or replies to one of your tweets on Twitter. I’ve only had it for about an hour, and I’m already used to it.

Who needs desktop applications anyway, when HTML5-enabled apps behave like this?

Update: Seesmic just confirmed the new Web client on their blog. Aside from Facebook and LinkedIn account integration and HTML5 desktop notifications for Chrome, the new client also comes with a fresh design and new visual clues, as well as support for additional languages (Indonesian, Korean, Polish and Dutch).