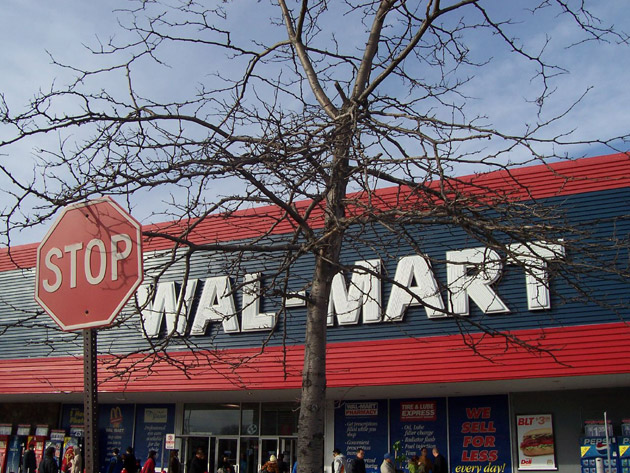 Wal-Mart, the biggest retail store in the U.S., has announced plans to attach RFID tags to certain articles of clothing, including jeans, underpants, and socks. Just the word alone—RFID—should set off your Spider Sense, but should you actually be afraid of shopping there from now on? I mean, there’s any number of things to be upset at Wal-Mart about, so where does the use of RFID fit in that anger matrix?

Starting on August 1 (so, Sunday), Wal-Mart will outfit RFID tags to select garments. These garments include jeans, socks, and underpants. They’re doing so, Wal-Mart says, in order to better serve you, the customer.

A store employee will be able to scan the jeans rack from a distance and say, “Uh oh, we’re running low on Size Y jeans, better go get some more from the back.” Advantage to you: you’ll never approach a jeans rack again and find that they’re out of your size. Knock on wood, of course.

That does seem to be the only use for the RFID tags. I mean, besides providing an additional anti-theft level.

So, why are so many people upset?

It seems to me that people aren’t so much upset at the idea of pants and socks having RFID tags on them, which is harmless in and of itself (unless you’re afraid that employees will know what size pants you wear), as they are afraid of Wal-Mart employees running around with RFID readers.

Think of all the things that have RFID chips embedded in them these days. Passports, certain credit cards, mass transit passes, drivers licenses—and more!

The issue is, and this is borderline supervillain-y, is that some no good kid could be armed with an RFID reader and read your personal information as you’re shopping for back-to-school clothes for your kids.

Katherine Albrecht, the director of the Consumers Against Supermarket Privacy, called it a first step toward a “very frightening tracking system.”

Wal-Mart, of course, says it’s not in the business of scanning your personal information, and that the tags will only be used for good, not evil.

I, for one, would like to see RFID abolished everywhere. Give me an example where the presence of RFID has actually enhanced a service. Some of the subways in New York have an RFID reader—how is that any easier than merely swiping your MetroCard? It’s not like the transition from tokens to MetroCards where there was a demonstrable benefit.

Then again, it’s not like any documents on my person have an RFID chip in them—yet, at least. So I’d be mad at Wal-Mart for something that wouldn’t even affect me.