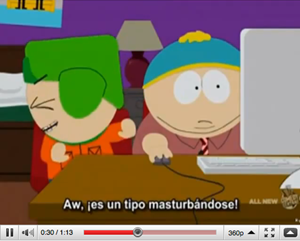 “While many people understood the concept of roulette, where sometimes you can lose the game – due to randomness, over time it became a major bottleneck in further development of the service, because of a certain difficulties with raising venture capital, legally operating on the United States territory and having to deal with negative feedback.”

“Luckily we all live in a real world, and we can easily apply the laws of a real world even on an internet application. With the help of a few good developers we’ve started collecting information, such as IP addresses, logs and screen captures of offenders who actually break US/UN laws by broadcasting inappropriate content in a specific situations. We’ve captured and saved thousands of IP addresses of alleged offenders, along with logs and screenshots which prove wrong behavior. We are initiating a conversation with enforcement agencies and we are willing to provide all the information we have. I hope that with help of a Criminal law we can finally get the problem out of our shoulders and get existing organizations which usually solve these kind of problems to help us.”

While the odd tone of the post (titled “Utopian world and its dark side challenges”) can most likely be attributed to the fact that English is Ternovskiy’s second language, this is obviously intended to be a serious response to the lingering issues that have made potential investors wary. Last month, one insider told us: “If he doesn’t make a dramatic move soon to clean up the service, the brand will be permanently tarnished.” Ternovskiy is clearly heeding that advice.

Interest in Chatroulette has been high but investment has yet to come. However it’s not just the penises that marginalize the platform. Web video is a notoriously tough and unprofitable industry, and the actual tech behind Chatroulette is so simple to replicate that it’s hard to see any kind of exclusivity. Much like 4Chan, Chatroulette is considered part of the seamier side of the Internet, which tends to be a red flag for potential investors. Some hope lies in the fact that 4Chan founder Christopher Poole’s latest venture Canvas Networks just got $625k in seed funding and is currently hiring.

“We’ve blocked thousands of IP addresses, reported offenders and service seems to be much cleaner than before. That is cool. Now give us some time to put new features in place (sic)”

It is not clear exactly what these new features are as Ternovskiy has not yet gotten back to me. Founder of Rocketboom Andrew Baron has his own Digg-inspired ideas:

“For example, what if users who received a thumbs-up, or a positive score of some sort, could rise-up, and thus based on merit within the community, work their way up to the top of the chatroulette charts where their broadcast could be watched by many. Thus, a user who entered into Chatroulette, could have the option to (A) dive in as a participant, as it is set up now, or (B) dive in as viewer only.”

It’s certainly possible that Ternovskiy will eventually raise a modest amount of funding, given his sheer effort. However, unless something drastic happens, Chatroulette is doomed to the weird Internet curio cabinet, a fundamental part of its early appeal — like “Ah, remember Chatroulette!?” Perhaps instead of calling the police, Ternovskiy needs to take inspiration from Poole and abandon the “Chatroulette as a business idea” altogether, using his vision to come up with something entirely new, something more immediately “investment-ready”?