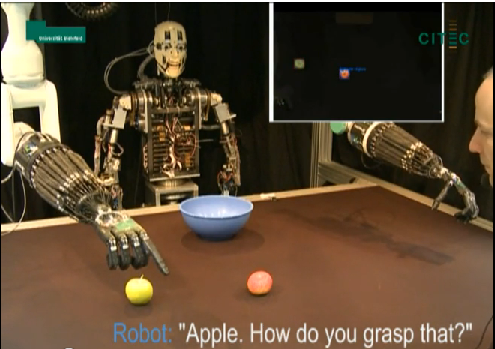 Bielefeld University in Germany has developed BARTHOC, an upper-body robot that’s capable of “learning”. The robot is, to some extent, able to communicate with humans, pick up and execute instructions. For example, he can identify, label, grasp and move objects in his vicinity with his hands – while “conversing” with a human partner about the objects.

And as you can see in the video embedded below, BARTHOC is very creepy design-wise, at least in his current form. He’s pretty slow and his arms are detached from his body, but I hope the researchers at Bielefeld University are already working on a more advanced version. The current model is pretty impressive already.

Watch the so-called “Curious Robot” in action in the clip below (German language, English subs):