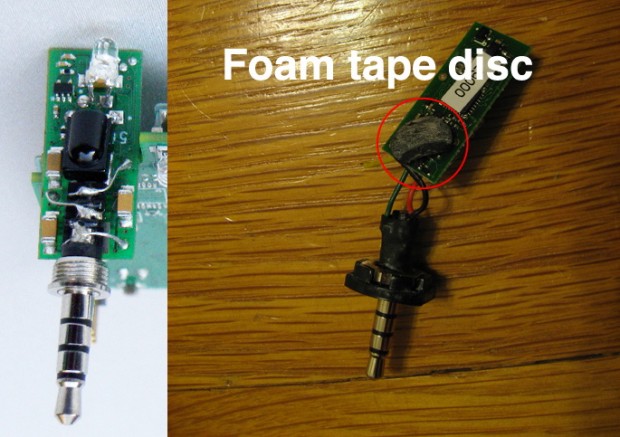 Lot C0101 of the RedEye mini IR adapter for the iPhone and iPad have been recalled for structural issues. The plug can crack away from the case and cause problems. In fact, the plug is attached only with a small piece of adhesive tape, which reduces the total structural integrity to nil.

The manufacturer of the C0101 lot felt that it was too difficult to solder the headphone jack to the printed circuit board in this fashion. As a result, we approved a design change that would allow the circuit board to be secured to the plastic enclosure by a permanent adhesive, thus keeping the printed circuit board fixed and preventing vibrations from stressing the wiring.
We began to see an alarming number of tested units fail “in the field,” so on Thursday, 22 July 2010 we opened up some of these units to discover that the circuit boards were secured with a relatively small dot of low-tack foam tape. As a result of being improperly secured, circuit boards are coming loose from their housings and being jostled about. As they shake, wires become loose and break, or come in contact with other components on the board, resulting in erratic behavior of the unit.

The $49 dongle uses the RedEye iPhone app to translate “sounds” over the headphone jack into IR patterns. You can use it to control your TV, stereo, game system, etc.