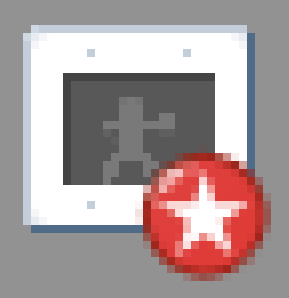 There’s a new mystery on the web today. In an otherwise boring video about “Google Lookup in Google Docs,” the search giant appears to have inadvertently revealed a new Google Docs product called “Punch.” So what on Earth is it?

The blog Google Operating System (which spotted the feature) has its guess: “Maybe Google Punch is a free-form document that lets you combine data from other documents, spreadsheets, presentations and forms.” ReadWriteWeb expands on that a bit for a similar guess: “Perhaps a Punch is a mix of functions and content intended for collaboration, more than for posting publishing like Google Pages is.” Both sound plausible, but we have another guess.

Look at the icon for Punch. If you can’t see it in the blurry video, check out a higher resolution of it here on Google Doc’s servers (yes, it’s very real). As you can see, it’s some sort of screen in the background with a star-within-a-red-circle logo in the foreground. On that screen appears to be a humanoid figure holding something in its one hand closest to the logo. Or perhaps it’s punching something with that hand — hard to tell.

Anyway, that icon most closely resembles the icon for Google Presentation, Google’s office presentation creation tool. This makes it seem as if whatever Punch is, it’s meant to be either used with Google Presentation, or it’s a tool meant to create things to be shown off in a similar way to Presentation documents. Could it be some sort of tool used for Presentation titles? Would that really necessitate its own tool? And what’s with the star?

Another guess might be some sort of animation tool, but Google already has a Drawing tool in Docs, so we can likely rule that out.

The key may be the humanoid figure on the screen in the icon. Google Presentation does not have such a figure in its icon. This might once again point to a more visual element of the tool.

One thing we do know is that for as much as Google Docs has been catching up with Microsoft Office, they still don’t offer one tool that Office does: Microsoft Publisher. Sure, it’s smaller tool, but it’s still a part of the Office package. What is it? It’s sort of like Microsoft Word, but the emphasis is more on the visual side of document creation. “Create visually compelling publications that are sure to impress,” the official site reads.

Wikipedia also notes that it’s “a program mostly used for designing brochures, labels, calendars, greeting cards, business cards, newsletter, and postcards.” You can do some of that with Google Docs’ templates now, but there’s no simple app to do all of it.

Does Google need such a tool? Who knows. But if they want to destroy Office, they’re going to need to attack it on all fronts, and that means creating a “Publisher-killer” too. Is that what Google Punch is? Maybe. Or maybe that’s also a big swing as a miss.