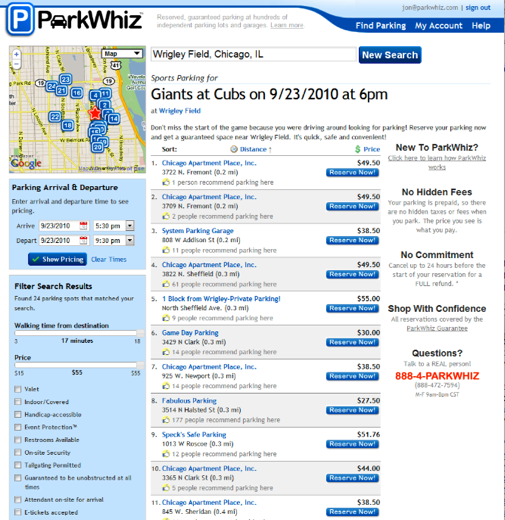 Finding parking in near concerts or sports events can be an incredibly frustrating task. Because of the event, the cost to park in lots near the stadium or venue can be exorbitant. Plus, lots can fill up fast. Enter ParkWhiz, a Chicago-based startup that allows customers to reserve parking on the fly.

Via a web app and a newly launched mobile HTML5 website, ParkWhiz allows you to reserve parking near concert and event venues in the U.S. ParkWhiz partners with parking lot owners, which range from people who own a single space to large parking management companies, across the country to list their inventory on ParkWhiz.

For example, ParkWhiz just helped park over 400 cars (who paid on average of $40 per parking spot) for the Paul McCartney concert at AT&T Park last week in San Francisco. ParkWhiz’s CEO and co-founder Aashish Dalal says the startup has also started to serve coupons for restaurants and bars (in neighborhoods nearby the event space) with parking reservations.

In terms of pricing, there is no fee to list a parking space on the site; ParkWhiz collects a fee only if a reservation is made and handles payment processing for the parking vendors. Generally, the user has to pay 10 percent customer convenience fee to ParkWhiz in addition to parking price, and ParkWhiz will also take a 15 percent cut from the base rate from the parking vendors. In a year, the site has already taken 50,000 reservations, with the goal of hittig 100,000 resetvations by the end of the year.

Of course, ParkWhiz isn’t the first company to use technology to try to solve the problem of finding parking. Car Harbor allows you to rent your parking space, and there are a number of iPhone apps to aim to solve the same problem including Spotswitch and Primospot. Even Google is getting into the parking game, recently launching Open Spot, an Android app that shows you a map with nearby open parking spots marked with colored dots.