Earlier this week, ABC News launched a new iPad application that adds a twist to the way most apps present the news: a third dimension. Fire up the app and you’re immediately faced with a nifty-looking globe that’s covered in headlines and photographs depicting the day’s top stories; tap one and you’ll be linked to the relevant video clip or news article. It’s quite snazzy, at least from a looks perspective (more on that later), and it’s quickly risen to become the #1 free application on the App Store.

To learn more about the app, our own Lora Kolodny ventured over the ABC News headquarters, where she interviewed anchor George Stephanopoulos and a pair of execs who helped create the application.

Stephanopoulos says that he was quickly enamored of the application’s globe, which is a running theme in the interviews (though he said that he hadn’t had a chance to play around with it too much at the time of the interview). On a related note, when guaging his affinity for gadgets on a scale of 1-10, he gives himself a 4.5 (he does own an iPad, but his family has issues getting the cable box to behave properly).

Andrew Morse, Executive Producer of Integration and Innovation at ABC News Digital, says that the globe is meant to be a “meandering experience”. He explains that on traditional sites, people complain that you only get what you’re looking for, and that there isn’t the discovery factor you get from a newspaper.

Isaac Josephson, VP Product Development for ABC News Digital, says that the team has been working on the app for a solid three months, and that it stirred up more excitement among traditional broadcasters than any previous product they’d developed.

My take on the app? Looks aren’t everything — if you want to catch up on the day’s top headlines at a glance, this might not be what you’re looking for. The globe may be fun, but in my experience it also has a habit of obscuring most of the app’s available content (only two or three stories are legible at once). You can flick the globe around a few times and be pretty confident that you’ve seen everything, but it’s hard to kick the nagging feeling that you may have inadvertently skipped over the day’s top story.

That said, the ABC team may be right: if you’re just looking to kill some time discovering random highlights from the day’s news, this may be exactly what you’re looking for. And if you just want the headlines, you can venture over to the ABC News HTML5 site, which is integrated into the app. 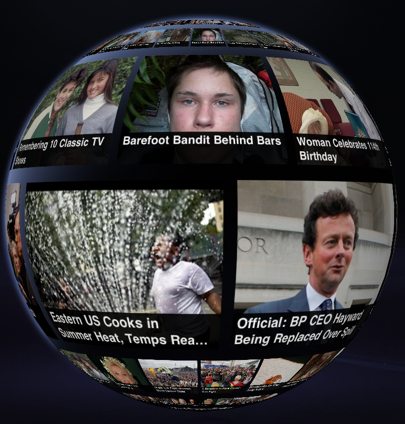