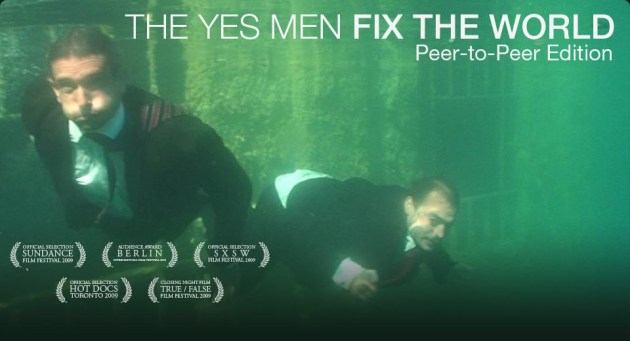 I’d describe The Yes Men as a less annoying Improv Everywhere. There’s also a larger, more important point to their antics. They released a movie a few months ago called “The Yes Men Fix the World,” but DVD distribution can take you but so far in 2010. Solution? Release the movie (courtesy of Vodo) 100 percent legally via BitTorrent. I’m downloading now~!

The point to releasing the movie via BitTorrent—totally for free, of course—is obviously to get as many people as possible to watch it. Making a movie, even one that’s free of stupid special effects, takes quite a bit of time and money. There’s a handy donate button there if you’re feeling generous.

Like I said, I’m downloading the torrent right now, but I’d be lying if I said it’s the fastest torrent I’ve ever seen. It’s currently transferring at around 1.4 MB/s—a far cry from the 11-12MB/s that my connection can handle. There’s more than 200 seeders right now and some 700 peers. If even half of those people donate $5 or $10, well, perhaps we’ll see “The Yes Men Fix The World, Again” sooner rather than later.

Oh, this edition of the film contains footage you won’t see ANYWHERE ELSE~! because the guys are being sued. Figures.