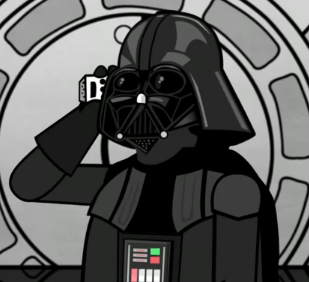 Regardless of what you think about the whole iPhone 4 antenna debate, there’s no denying that it’s fueling a massive amount of creativity on the Internet. We’ve got the iPhone 4 antenna song (which Apple even played at its press conference), the cute “End Call” antenna covering stickers, the College Humor take on the press conference, and, of course, the Taiwanese animation for Antennagate with light sabers.

The Taiwanese video features Bill Gates (or some other Microsoft guy) as Darth Vader. Vader also plays a pivotal role in new video today by Russell Arch. No, it’s not as good as the Taiwanese one (nor the iPhone vs. EVO videos), but it’s still pretty funny. It starts off slow, but it gets good at the end.

See also: The Best Of The iPhone 4 Spoofs