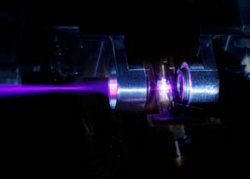 A recent announcement from Sony revealed the development on a new type of blue-violet ultra-fast pulsed laser for optical disks. Sounds like it might be time to change formats again!

To be fair, Sony only announced they were developing the laser — they didn’t actually say anything about bringing it to market, or even if it is intended to replace the current Blu-ray format. What they did reveal is that the new laser is capable of reading a disk that has 20 times the capacity of the current generation of optical storage. This means that a blue-violet based player could have more then 50 movies on one disk, or (even more likely) fit an entire season of a TV show on one disk. That would certainly help clean up my Netflix queue!