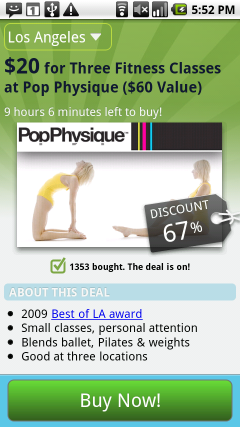 Daily deal sensation Groupon has released an app for Android devices, the company announced this morning on its company blog.

The free app (unlike this one, an official one) enables users to buy deals in over 65 cities, access their purchased Groupons and find ones that are nearby.

You can also redeem deals from the app and view side deals by selecting the “More Deals” option in the deal page menu.

It works similarly to Groupon’s iPhone app, which has been out since March 2010.

Not much to add to that little nugget of news, apart from the fact that the company is keen on improving the app and awaiting feedback from Android users on how to do so.

Groupon has to date raised a whopping $173 million in venture capital, most recently scoring a $135 million round at a $1.35 billion valuation.

(Thanks to Mihir for the heads up)