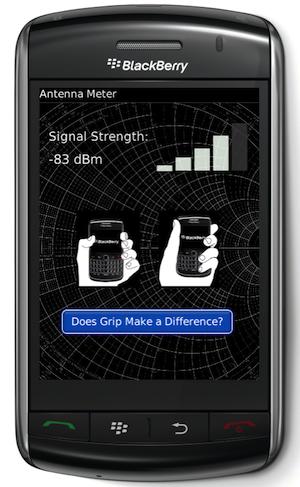 Reading over the press release for the new “Antenna Meter” application for RIM’s BlackBerry devices, I’ll admit that I was bored. Okay, so it’s exactly what it says it is: an antenna meter. But aha! The two companies behind the app, Xtreme Labs and Fixmo, know how to pitch it. It’s not an antenna meter, it’s a “death grip” meter. Immediately, I’m much more interested.

As you’re undoubtedly aware by now, “death grip” is the term given to smartphone signal loss when a phone is held in your hand a certain way (that covers the antenna). Notably, this has been an issue with the iPhone 4. But Apple called a press conference a week ago to basically say that the problem isn’t unique to their device. And in fact, they showed that it affects other devices by rivals as well. One of those was a BlackBerry device. And RIM was not too pleased about that.

But other than issue a stern statement citing RIM as a “global leader in antenna design” (and potentially taking down videos showing the death grip) we haven’t seen much out of them to prove how good their antennas actually are. That’s what this app intends to do. While the release doesn’t mention “death grip” specifically, it’s clear what this is aimed at. Fixmo’s co-founder Rick Segal cites the “noise and unfair implications leveled at Research In Motion” as the basis for this app.

The pitch to me was more straightforward, “We also have a feature that encourages you to try out different ‘death grips’ on the BlackBerry to see resulting fluctuations in antenna signal strength.”

Something tells me we won’t be seeing an app like this in Apple’s App Store anytime soon. But if you want to try it out for BlackBerry, you can go here on your BlackBerry web browser.