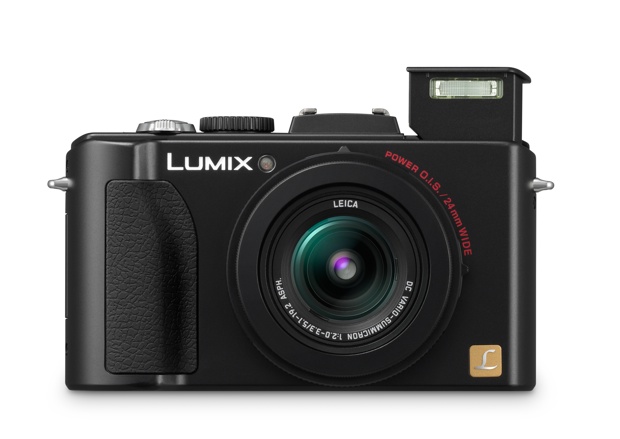 Don’t go wilding in the streets of Detroit or anything, but Panasonic just released five new cameras including the much-anticipated LX5, a low-light point and shoot with Leica glass. They also released the TS10, a ruggedized point and shoot, and the FZ40, a 24x ultrazoom camera with HD video recording.

The cameras should be available in August-September. Press releases and images after the jump.

“Building on the versatility and depth of the FZ-Series, the LUMIX FZ40 provides outstanding and advanced creative hybrid camera capabilities and features to photographers – giving them increased flexibility and a wide-range of features,” said David Briganti, Senior Product Manager, Imaging, Panasonic Consumer Electronics Company. “In the LUMIX FZ40, consumers will find easy-to-use features they would find in super-compact point-and-shoots, but with the added 24x optical zoom and improved manual controls.”

The LUMIX FZ40 features Intelligent Resolution technology which leads to optimum signal processing, giving images outstanding natural clarity, specifically focusing on the finer details. The Sonic Speed Auto Focus (AF) and high-speed start-up found on the FZ40 are at the industry’s fastest level, helping users to catch even the most fleeting photo opportunities.

The LUMIX FZ40 has upgraded intuitive manual and creative controls including the new jog dial which helps to elevate the camera’s operability. The jog dial is a focus button which allows users to change settings quickly including shutter speed and aperture, depending on the shooting conditions. Additionally, the new My Color mode which has been popular on LUMIX G Micro System cameras is available in both still and movie modes, and gives users creative freedom with a suite of options, including new Pin Hole, Film Grain, High Dynamic and High Dynamic B&W.

Users can now enjoy easy shooting of HD movies in AVCHD Lite with double the recording time in HD quality compared with the conventional Motion JPEG format. Additionally, a separate and dedicated button located on the top of the camera allows users to instantly begin recording in video mode – so switching between capturing still photos and video is quick and seamless.

Other features of the LUMIX FZ40 include a 3.0-inch 230,000-dot Intelligent LCD with 100% field of view, high energy efficiency which extends the battery life up to 580 shots (CIPA) per charge, and a new Video Divide function with which users can separate a video they’ve shot into two sections to shorten or delete any unwanted parts. Also, the LUMIX FZ40’s Wind Cut function blocks out noise from background wind when shooting in video mode.

The Panasonic LUMIX DMC-FZ40 will be available in black in late-August for a suggested retail price of $399.95

SECAUCUS, NJ (July 21, 2010) – Panasonic today introduced the new LUMIX DMC-TS10 digital camera, the latest addition to the company’s TS-Series of rugged models, ideal for active users wanting a versatile camera for outdoor use. Featuring a flat, slim profile, and a folded optics design with a 4x optical zoom lens, the new 14.1-megapixel LUMIX TS10 is waterproof to approximately 10 feet, shockproof to 5 feet, dustproof and freezeproof to 14˚F*1. For even further protection, the LUMIX TS10 comes with a silicone jacket to help prevent scratches.

“Rugged digital cameras are a growing category, and the Panasonic LUMIX TS-Series continues to be very popular among consumers who are looking to use their digital camera while playing sports, at the beach, or simply to take high-quality photos and videos, regardless of the shooting environment,” said David Briganti, Senior Product Manager, Imaging, Panasonic Consumer Electronics Company. “The new LUMIX TS10 is also our most affordable rugged model and extremely easy-to-use – making it attractive for any consumer looking for a waterproof, freezeproof, dustproof and shockproof, rugged digital camera.”

Panasonic’s popular Intelligent Auto (iA) mode makes it easy for anyone to take beautiful photos by offering a full suite of shooting-assist functions. The LUMIX TS10 makes it extremely easy for consumers to engage this setting, with a dedicated iA button on the top of the camera. The MEGA O.I.S. helps reduce blur due to hand-shake and the Intelligent ISO control prevents a moving subject from being blurred by optimizing the shutter speed and ISO sensitivity setting, to produce sharp, clear images. Human faces are captured in focus and with correct exposure using the Face Detection mode and unwanted red-eyes are digitally corrected and backlight compensation automatically adjusted. Intelligent Scene Selector automatically selects one of six Scene Modes – Macro, Portrait, Scenery, Night Portrait, Night Scenery and Sunset – that best suits the shooting situation. The Quick AF system allows the camera to keep focus on the subject while the camera is in recording mode even before pressing a shutter button halfway.

The Panasonic LUMIX TS10 features an easy-to-see, 2.7-inch 230,000-dot Intelligent LCD for comfortable viewing while both monitoring shots and playing back the results. The Intelligent LCD function detects the light condition and automatically boosts the LCD backlighting by 40% when shooting outdoors in bright sunshine, and adjusts the frame rate when shooting in low-lit situations. Detecting the lighting condition precisely and automatically controlling the brightness with a total of 11 fine steps, this function gives the display the most appropriate clarity in any situation without using extra energy. The High-Angle mode makes the LCD screen extremely easy to view when the camera is held high, such as when shooting over a crowd.
The Panasonic LUMIX TS10 will be available in blue, red, black and silver in mid-September for a suggested retail price of $249.95.

“The Panasonic LUMIX LX-Series cameras have been extremely popular models for us with professional and enthusiast photographers, who understand and value the superb image quality such a compact, affordable digital camera can offer,” said David Briganti, Senior Product Manager, Imaging, Panasonic Consumer Electronics Company. “We expect the same enthusiasm, if not more, for the LUMIX LX5, which features improvements to the lens and processing – resulting in even better images.”

The Panasonic LUMIX LX5 is a unique compact digital camera in that it offers superb image quality along with a super-bright lens and increased creative modes. The F2.0 lens is twice as bright as a F2.8 lens, making it easy to produce beautiful photos with a soft-focused background thanks to the shallow depth of field provided by the extra light. In addition to the newly-designed lens, the LUMIX LX5 features an image processing engine that combines technologies resulting in professional-quality photos, especially in low-light situations. Like its predecessor, the LUMIX LX5 features the highly-acclaimed 10.1-megapixel CCD, but it has an expanded dynamic range by increasing the sensitivity and the saturation.

The newly developed Venus Engine FHD image processor enables higher-speed, higher-performance while compiling the Intelligent Resolution technology. The triple CPUs in this imaging engine dramatically speeds up processing while achieving exceptional noise reduction performance. With its high-sensitivity CCD and the brightness of the lens, minimum illumination of the LUMIX LX5 is as low as 3 lux while shooting video.

In addition to capturing high-quality still photos, the LUMIX LX5 can record HD videos in AVCHD Lite, a format that allows almost doubling the recording time in HD quality compared with the conventional Motion JPEG format. Creative video shooting modes include Creative Movie mode, where users can set shutter speed and aperture manually to make even more impressive movies. My Color mode and Film mode are available for more extended expression not only in photography but also in videography. The LUMIX LX5 also features Dolby Digital Creator to record high quality audio and the 3.8x optical zoom is available while shooting video.

The LUMIX LX5 has also been redesigned externally – with a thicker grip making it easier to hold and a newly-incorporated turn-and-push jog dial achieves various selection and setting more quickly. The LUMIX LX5 also features a hot shoe, which allows for the attachment of a wide-variety of accessories, such as an optional Live View Finder which helps shooting under strong daylight with high visibility or an external flash. The 1:1 square format setting is added in the aspect ratio option which can be selected with the switch at the side of the lens barrel.