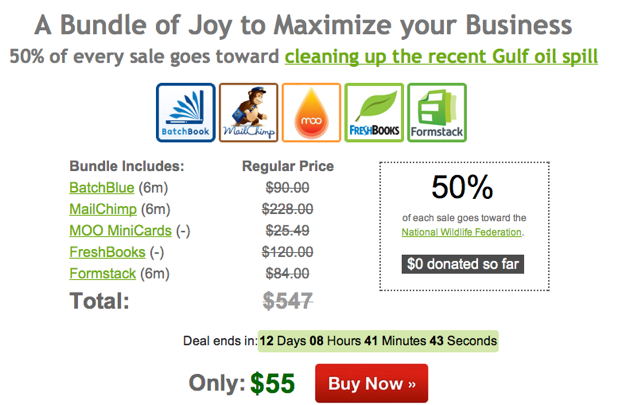 Over the last few years, the web has shown a thirst for time-sensitive deals that offer premium goods at steep discounts. Woot’s one-a-day model has proven immensely popular (Amazon just acquired the company last month), and Groupon has quickly grown into a phenomenal hit. Now AppSumo is looking to tap into the success of these models, but with a twist: it offers deals on premium software and web services.

The company launched last month with its first deal, offering a set of applications focused on productivity. Cofounder Noah Kagan says that AppSumo sold 500 of those bundles at $55 a pop. That money is distributed among the application developers (in that deal, Evernote, RescueTime, and a handful of others), and AppSumo takes a cut as well. In some cases developers only get paid if the customer actually uses the activation code they’re sent; other developers get paid regardless of if a customer ever actually uses their service.

Today AppSumo is running a deal that it’s calling the “Entrepreneur Bundle”: for $50, it includes premium access to social CRM BatchBlue, email marketing manager MailChimp, business card maker MOO, finance tool FreshBooks, and Formstack, which offers wizards for building out web-based data forms. To sweeten the deal, the company will be giving 50% of every sale to the National Wildlife Federation to help with the oil spill crisis.

AppSumo isn’t the first company to offer deals on software — we’ve seen such bundle deals from sites like MacHeist for years. But Kagan believes that more applications that have historically been desktop-based will be making their way to the web, and he’s hoping that AppSumo will serve as a new channel to help these companies acquire customers.

Kagan’s previous company, an offers provider called Gambit, was banned from Facebook late last year. That’s hurt the company quite a bit (and others in the industry who don’t have Facebook’s blessing are having problems too) but Kagan says that Gambit is still profitable and growing.