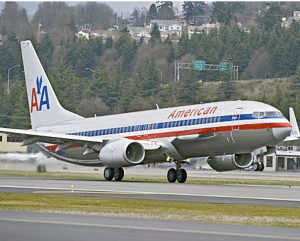 American Airlines announced today that it is buying 35 Next-Generation Boeing 737-800s to replace aging planes in its fleet. These aircraft are 35% more fuel efficient than the MD80 aircraft that they are replacing – which saves about 800,000 gallons of fuel per aircraft per year, the airline reports.

The new planes will be equipped with bigger overhead storage bins, and more AC power ports among other new interior features.

Good news for Gogo Inflight Internet: American Airlines also intends to equip all of its new 737s with wifi service, so passengers can surf the web, check e-mail and send instant messages from the air (but hopefully not indulge in loudly using video- and VOIP-services).

American Airlines currently has 167 planes equipped with Gogo (but only two of them are 737s).

The airline prohibits the use of VOIP on its in flight internet service. A company spokesperson explained today, “This restriction is a reaction to widespread passenger aversion to the idea of many people talking loudly on flights as we’ve all experienced before take-off or after landing.” It is difficult to stop every instance of VoIP, she adds, but Aircell — the airborne communications firm that owns and operates the consumer, wireless internet brand Gogo — is monitoring and working constantly to enforce this request.

American Airlines adds the new 737s to 84 previous orders. It started bringing the 737s into its narrowbody fleet as of April 2009. The company expects to have a total of 195 of these planes by the end of 2012.

Gerard Arpey, chief executive and chairman of AMR Corp., the company that owns American Airlines, in a press statement noted that the new aircraft would help the company “manage through future fuel price volatility, which continues to be a challenge for the entire industry.”

The International Air Transport Association and Platts report that the cost of jet fuel is up 24% year-over-year, now. The global trade group for the air transport industry also estimates that the average expenditure on jet fuel this year will reach $88.2 billion, up $17 billion from last year, globally.