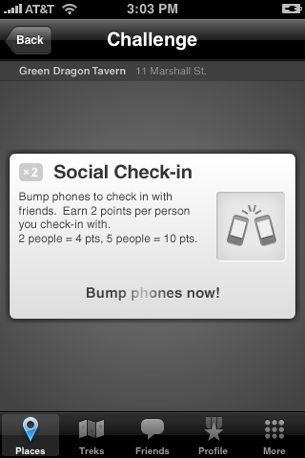 Foursquare may be helpful for seeing what your friends are up to, but the act of checking in — standing in a bar, face buried in your phone’s screen as you hunt for the right venue — is anything but social. Now, hot on the heels of its partnership with the New England Patriots, location-based gaming service SCVNGR is announcing a nifty new feature that could go a long way toward resolving this issue (and we’ll probably see other services copy it). If you’ve tried Bump, it will sound very familiar: a social check-in involves getting a group of friends to physically tap their phones together at the same time (it’s more fun than it sounds).

So why would anyone actually want to do this? First, it’s more fun than your standard check-in — I could see this working as a decent, albeit nerdy, icebreaker at bars. And it’s probable that the Patriots will be trying it out during a game as part of a stadium-wide social checkin. SCVNGR is also incenting users to do this by offering in-game bonuses that make social check-ins worth significantly more than most other actions.

SCVNGR CEO Seth Priebatsch says that he initially hoped to implement the feature using Bump’s API, but found that that service couldn’t properly handle multiple phone taps at once — he says it’s designed for 1-to-1 transfers of contacts and other media. So SCVNGR designed a system that would allow many (even thousands) of people to tap their phones together in order to achieve a group checkin.

Of course, physically hitting devices that cost upwards of $500 isn’t always the best idea, especially when you’re trying to get a bunch of people to do it at once (some of whom may not be especially sober). Fortunately there’s an alternative: Priebatsch says that some well-timed phone shaking when you’re in the vicinity of your friends will work just fine.