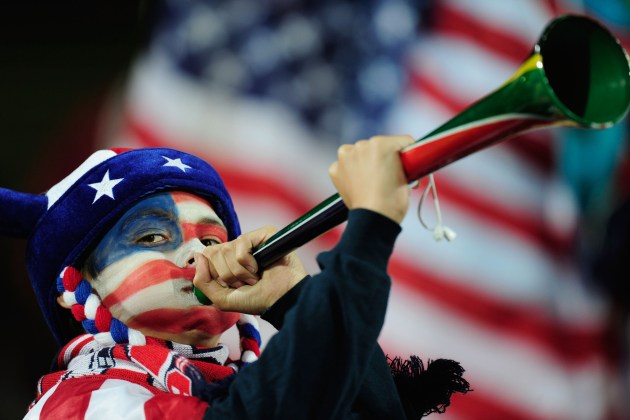 A few stories came out of the World Cup (besides the fact that Spain is the best team on the planet): the Adidas Jabulani is now the most (in)famous ball in history, Diego Forlán is the man diggity, and everyone hates the vuvuzela. Not me—I don’t mind ‘em.

The story now, though, is that everyone outside of South Africa is banning the vuvuzela. UFC President Dana White was ahead of the curve and banned it from the recent UFC 116 event. (But I do wonder whether or not White has the power to tell the MGM Grand Garden Arena what and to permit and deny.)

Two big soccer teams in England, arch-rivals Tottenham and Arsenal, have now banned the vuvuzela from the upcoming season. Arsenal at least tries to sound scientific about it and not merely, “They sound terrible!””

“Further to their hugely debated involvement at this summer’s World Cup Finals in South Africa, Arsenal Football Club has decided to forbid the use of vuvuzelas within Emirates Stadium with immediate effect. This decision has been taken to ensure the enjoyment and safety of supporters on matchdays, which is of paramount importance to the club.

Other teams to lay down the ban-hammer include Birmingham and West Ham.

If I had one, I’d be using it when I see Thierry Henry~! destroy the LA Galaxy defense next month. Be there.