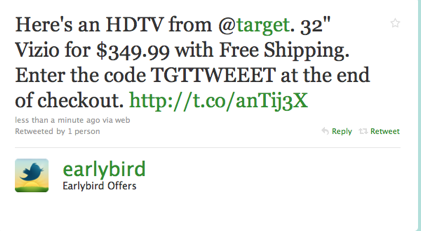 Last week Twitter’s Earlybird took flight with its first deal, tickets for “The Sorcerer’s Apprentice,” a film from Walt Disney Pictures and Jerry Bruckheimer Films. Today, Twitter is unveiling its second deal from the new sales initiative, a TV. The new deal offers a 32-inch Vizio HDTV for $349.99 at Target, along with free shipping.

As we wrote in our previous coverage, Twitter is partnering with advertisers to distribute offers via the @EarlyBird account, and they get to determine the terms of the offer, including availability, amount, and pricing. Twitter says that deals will be published via the @EarlyBird handle several times a week.

So is it a good deal? The TV is listed on Target as $388 (the original list price is $450), so you’ll get a little less than $40 discount plus free shipping. On Amazon the TV is listed for $405 but Walmart has the same TV for only $358, which is just $10 more than the discount. Sam’s Club has the same TV for exactly $348. Of course the Twitter-sponsored deal includes free shipping.

So in the end, it’s an ok deal. Nothing really spectacular, considering all the hype around EarlyBird. Last week’s deal was also mediocre, considering the terrible reviews the movie received.

UPDATE: Twitter actually sent out the wrong promotional code in the first Earlybird Tweet; and has since corrected the mistake