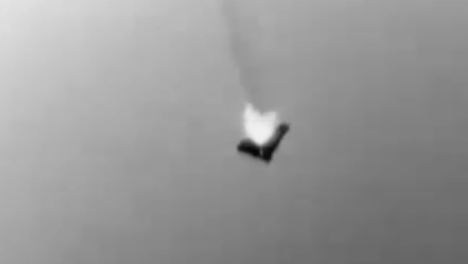 There’s no way to begin this next story without breaking out this movie quote: “If I were creating the world I wouldn’t mess about with butterflies and daffodils. I would have started with lasers, eight o’clock, Day One!” With that out of the way, for the first time in human history a laser was used to shoot down an aircraft in flight. Well done to the fine folks at the US Navy.

The incident (I guess you would call this an “incident,” but I don’t mean anything negative by that) actually took place last May around 100 miles west of Los Angeles, but it wasn’t revealed till a few hours ago. It was part of a joint training session between the Navy and Raythen, the defense technology company.

Imagine this: an aircraft flies overhead at around 300 mph, then a laser beam is shot from a ship. You can’t even see the laser until it hits the target. Then the target goes bye-bye.

The system, called Laser Close-In Weapons System, produces a 50kW (!) laser, one that can be used on its own (as in this example) or with a more conventional missile system. It’s being called “the real Star Wars” or “better than Star Wars.”

Even though this test was a success, it won’t be till 2016 that it’ll actually be ready for battlefield use.

I wonder who I’d have to call to get a review unit?