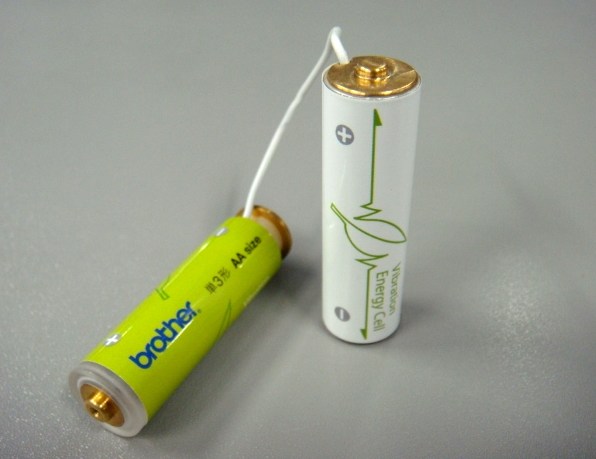 Harvesting kinetic energy to “charge” a power element is something that goes back thousands of years, to the wind and water mills among other things. And in a more germane form, the self-winding watch goes back decades, if not longer (I’m not the watch expert here). So it’s not really a surprise that it’s being put into batteries — though I wonder whether this is the most efficient way of going about this.

At first I thought these were like the “parametric generators” we saw back in March, but those harvest ambient harmonics. These batteries from Brother are designed to be shaken, not hummed at.

You’ve probably seen the flashlights that you can shake for a few minutes in order to get half an hour of light (they’re called Faraday flashlights, interestingly). Very handy — and smart, in that the power generator is the size of the flashlight itself and not contained within the battery. With kinetic harvesting, the more movement, the more space, the more force, the better. These things seem to work the same way, but because they have to put so much more in a small space, the power they can generate and store is necessarily lower. Occasional draws of 100mW seem to be the limit for now, which pretty much puts this in the “clicker” category. Well, good. I hate changing the batteries in clickers.