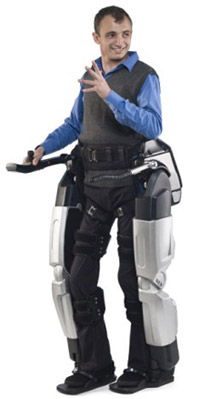 Hayden Allen, who looks quite a bit like Atlético Madrid’s Simão Sabrosa, is one of the first people on the planet to use Rex, the Robotic Exoskeleton. Developed in New Zealand—need I remind you that New Zealand was the only undefeated team in the World Cup—Rex can beest be described as robotic legs. Point being, Allen, whose spinal cord was injured in an accident, can now walk again. Pretty great, yes.

Rexes are made for individual users—you can’t pick these up by visiting your local general store.

Rex weighs about 84 pounds and is powered by a rechargeable battery.

Users would transition from a wheelchair, then control the legs using a joystick and control pad. I would imagine that having a strong video game background would make using Rex a little bit easier.

The benefits of Rex extend far beyond the merely physical. Says a neurologist:

There are obvious immediate benefits in terms of mobility, improved social interaction and self-image. There are also likely to be major long-term health and quality of life benefits through reducing the complications of being in a wheelchair all the time.I think that this will also enable people to stay well longer; this means that those who have conditions where disease-modifying treatments are coming over the next five to ten years will be in better shape when those treatments finally arrive.

See? Not all tech is merely expensive toys!