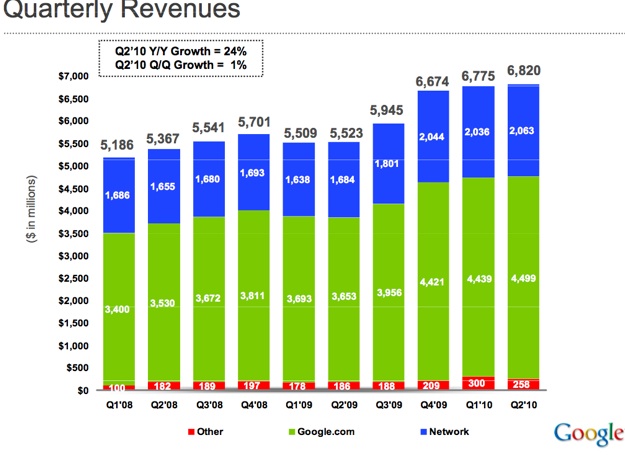 Google has just announced its second quarter earnings for 2010. Of note, revenue stood at $6.82 billion, which is an increase of 24% year-over-year. But this only represents an increase of 1% over Q1 2010. Google has a history of seeing small growth from Q1 to Q2, however.

More interesting may be that net income actually fell in Q2 versus Q1 of this year. A big reason for that is likely because paid clicks fell by 3% from quarter to quarter. Another factor is that network revenues (those off of Google.com) fell by 1% this quarter compared to last quarter.

All that said, Google now has $30.1 billion in cash, cash equivalents, and short-term securities — which is up nearly $4 billion from last quarter. Google also has about a thousand more employees now (21,805 full-time) versus what it had a quarter ago.

Below find some live notes from the earnings call:

– “Overall we are very pleased with Q2 results”

– We noticed that more and more traditional brand advertisers are embracing ways to expand their brands online. Like P&G.

– Campaigns across display, mobile, and search — it’s all being integrated.

– We entered into agreement with Omnicom this is significant

– YouTube is seeing impressive growth with regard to ads.

– Very pleased with courts decision to rule in our favor for Viacom case.

– Mobile ads continue to grow. And now AdMob is here.

– The world is moving into the cloud.

– After Q3 we won’t recognize the sales from Nexus One — as we announced, we’re stopping selling them.

– International revenue is 52% of our revenue.

– Capex up as they ramp up data centers

– “Now the web is much, much, much more complicated.”

– We introduced Caffeine, a new way of updating our index

– 50% fresher results than before

– And we’ve had a bunch of UI and UX updates.

– “People would click on fewer ads — that would be bad”

– “You have to make ads that people want to watch.”

– When you search from your phone, you’re much more likely to click if they have a clickable address in them.

– Display is going really well. The ultimate goal is to designate a particular audience on our network.

– Android is a leading example of being open. Most of these devices are developed independent of Google.

– People spent 4.8 million hours playing Pac-Man on our main site when it was up.

Q: Were bonuses a part of operating expenses?

A: That had a small impact. It was about headcount, marketing and acquisitions.

Q: How much of paid click is coming from mobile?

A: Mobile is growing faster than other clicks. There is a larger range of mobile clicks, but we don’t detail.

Q: Where are the headcount increases coming from?

A: Not really enough data yet to say. It’s really a different beast.

Q: How much investment is going into Android? Is it all just to compete? You’re not charging for it, how do you monetize it?

A: Android cost isn’t material for the company. Some of the key products have not been developed by Google at all — like the Droid X. The entire ecosystem is exploding.

JR: I think the most important thing beyond the growth is that the most popular app is a browser. What do they do there? They search more than they ever have.

Q: Is search activity really strong on mobile devices? What a

A: For Google it has been a great quarter. There has been no impact from the larger economy problems. We’re really pleased. Cash breakdown is 50/50 U.S. vs. International.

A: Commercial paper is a great opportunity for us. We have made no decision about share buybacks. It’s a topic that is regularly debated, but nothing to announce.

Q: Android and mobile is a defensive strategy?

A: We did it for offensive reasons, not defensive reasons. We think an open ecosystem is incredible important. And we know that smartphones create a new set of activities for search and transaction. It’s both defensive and offensive.

Q: Android ecosystem support is less than what some would like.

A: We’re investing heavily. Search advertising is nascent in this space. And we’re doing a lot of innovation in cloud computing in other.

A: This is in its nascent stage. “I don’t think of this as defensive at all.”

A: We don’t comment on YouTube. But we are incredibly pleased by its trajectory. It’s 2 billion views per day. It’s a billion monetization views a week.

Q: Talk about Android and Chrome OS in terms of revenue. Is there any in the software?

A: It’s too early to answer that. We’re mostly focused on building out the platform with Android. With Chrome, it’s still too early.

Q: There has been a lot of debate for people’s methodologies. Be cautious about those numbers.

Q: Update on China? Are they okay with the new method?

A: The good news is we have our license renewal. Revenue from China is not material from our revenue though. We had decent revenues for Q2 though. I hope you understand why I won’t talk more about it.

Here are all the slides: