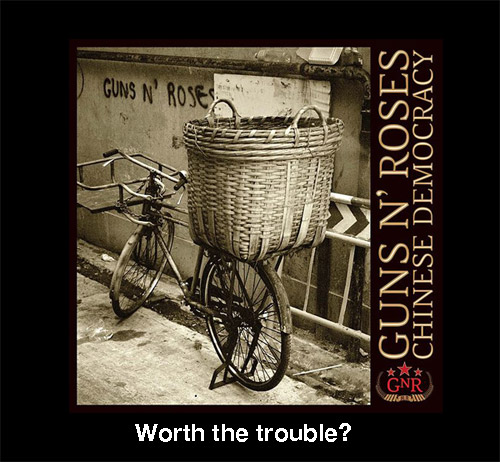 Famous rock band Guns N’ Roses released their latest album, Chinese Democracy, in November, 2008. It had been in development for an astonishing 15 years. That’s partially why Kevin Cogill got into so much trouble. You’ll recall that he was caught uploading tracks from the then-unreleased album in June, 2008. While he managed to doge jail time, Cogill was given a year of probation and two months of home confinement. He was also supposed to take part in a public service announcement on behalf of the Recording Industry Association of America&mdas;public enemy number one in the eyes of young people around the country.

So here we are in July, 2010, and we’re left wondering: what happened to that PSA?

Cogill tells Wired that the RIAA never bothered creating the PSA. The RIAA says it would have been too expensive and time consuming to create a PSA. (The where did all of the money won in various copyright infringement lawsuits go? Certainly not to the artists…)

Cogill was not entirely unrepentant, telling Current TV last August that file-sharers would get “f’d in the A,” getting it “right in the butt” from the RIAA.

Not the most eloquent speaker, no.

It’s a shame, too, since you can almost picture what the PSA would look like. It would be shot in black-and-white, of course, to convey the seriousness of the situation: sharing Justin Bieber songs online. The camera would hover menacingly over the shoulder of an anonymous youth fiddling around with an antiquated peer-to-peer application. Think LimeWire. As soon as the youth goes to download “One Time,” the computer monitor shuts off, and a flashing “pirate” symbol appears. Then the narrator says, “Stop stealing music! It’s, like, not cool, dude!” (Gotta have the youth vernacular in there.)