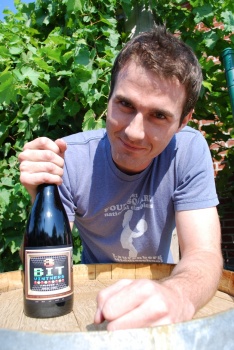 Geeks generally aren’t associated with drinking wine; soda, beer, sometimes even mead, but rarely do you connect wine drinking with being a geek. Mike James worked really hard to change that perception, and made great strides in bringing a more civilized drink to the unwashed masses. He was at least partly successful, and became known for producing limited runs with names like Player 1, and Boss Monster.

Unfortunately, geeks just don’t buy wine it seems. James wasn’t able to build the business to the level he needed, and archaic liquor laws made it difficult to get wine to the geeks that did want to sample his warez. James also was known for a rather unusual Child’s Play auction – a hand-etched bottle of “Boss Monster” that sold for $3,000 to PopCap Games. You can read the full interview with James in the Scottsdale AZ newspaper, which is where he lives now despite the wine being produced in Washington state.

If you have a taste for the vino, and want to help Mike on his way to semi-retirement, the 8-bit Player 1 Red is selling on wine.woot.com right now, for $49.99 for a 4 pack. Since Mike is calling it quits for the foreseeable future, this may be your last chance to buy a bottle of gaming history. I hear that the wine tastes pretty good too.